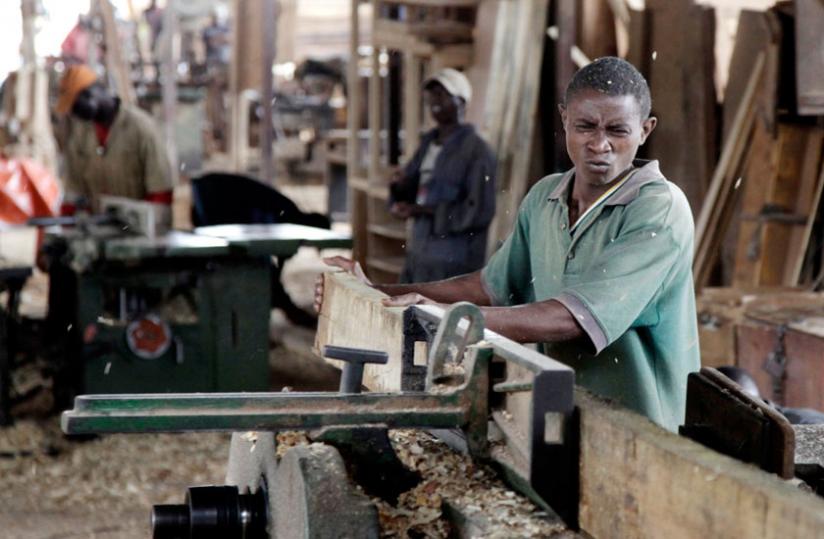 A carpenter in a workshop in Gakinjiro in Kigali. The National Labour Council has asked Mifotra to expedite the approval of the proposed minimum wage law. (File)

According to the proposed minimum wage document, a copy of which The New Times has obtained, the new wage, unlike the current one which many contend is outdated, proposes minimum wage depending on a professional category.

The minimum wage is the lowest hourly number, daily remuneration that employers may legally pay to workers.

The move follows complaints from workers that the minimum wage, which was set at Rwf100 as stipulated in the 1973 Labour Law, is overdue as it does not reflect economic realities and is impinging on the rights of workers.

Eric Manzi, the vice-president of National Labour Council and the general-secretary of the Trade Union Centre of Workers of Rwanda (Cestrar), said there should be a periodical review of the minimum wage to avoid the current situation where it has been in place for over 40 years.

Emphasising the importance of having the minimum wage categorised by profession, he said during this age and era, a one-size-fits-all approach was unrealistic.

Manzi said as there was no law or regulations indicating those categories in Rwanda, in coming up with the categories, they relied on international classifications.

He added that updating minimum wage is crucial for the welfare of workers, citing insurance companies which, when valuating the worth of damages in case of an accident by an employee, refer to minimum wage.

?Minimum wage is a fundamental element as it also determines the pension one will get since pension also is calculated based on a worker?s salary, which will affect the life of the pensioner,? Manzi said.

The labour council deputy head added that in their proposal, they did not only look at the workers? interest, but rather tried to strike a balance between the interest of the employees and their employers.

?We do not intend to make employers burdened with hefty salaries to employees, because if salaries outweigh the paying capabilities of the employers, then some institutions might close or lay off staff,? Manzi said.

?We want everyone?s rights to be upheld; symmetric interests to employees and employers.?

He said what they had was a proposal, adding that where they need to adjust, the Labour ministry can always consult them to make the changes.

MP Jean-Baptiste Rucibigango, president of the Rwanda Socialist Labour Party, said realistic salaries motivate the employees to work harder which further benefits the institutions they work for, and by extension, the country.

?For instance, when teachers get decent salaries, they concentrate on their jobs rather than always looking for part-time teaching opportunities which compromise their profession,? Rucibigango said.

He said the minimum wage, set at Rwf100 as stipulated in the 1973 Labour Law, is very meagre and oppresses workers? rights, adding that it should be increased at least to Rwf750 per day.

Rucibigango noted that minimum wage is essential as in case of layoff, workers get compensation based on it.
Anna Mugabo, director-general of labour and employment at the Ministry of Public Service and Labour, said they are still making consultations with other stakeholders to ensure the outcome is fair to all parties.

Among the parties they are consulting, besides the workers? council that came up with the proposed document, include government institutions and the private sector.

?Minimum wage is a crucial element in all aspects of economy. We have to set a reasonable and realistic minimum wage. This cannot come overnight, it needs time and rational considerations,? Mugabo said.

She, however, said there is no fixed time frame within which a consensus is expected to be reached.

Poverty is a major cause of child labour – Security Analyst

Minority describes approval of 2022 Budget as a nullity

MTN gets approval to operate Mobile Money in Nigeria