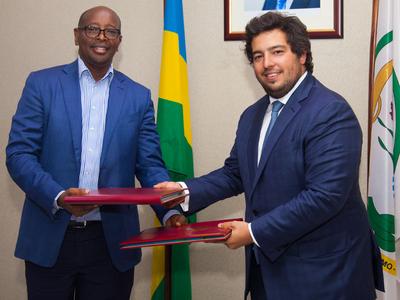 With the backing of the African Legal Support Facility, the Government of Rwanda has taken a concrete step toward becoming a transportation hub for the East African region with the signing of a Concession Agreement for the construction and operation of Bugesera International Airport. Kigali is being positioned to become a nerve center for business, travel, and shipping in the sub-region.

Worth approximately US$ $700 million, the Bugesera Airport project is designed to be executed across four phases. The first phase will involve approximately 27 months of construction—at an estimated cost of US$ $400 million—and is expected to be completed by 2019, at which point the airport will be able to accommodate 1.8 million passengers annually.

The ALSF provided assistance to the Government of Rwanda in the development of the project, notably the provision of legal advisers who supported the government in its negotiations between project partners in the Concession Agreement for the construction and development of the Airport. The coordination of legal efforts was instrumental in ensuring the signing, first of a Project Development Agreement and Joint-Venture Agreement between the Rwandan government and investor, and subsequently of the Concession Agreement.

The agreement was signed on behalf of the Government of Rwanda by the Minister of Infrastructure, James Musoni and Manuel Mota, Chief Executive Officer of Monta-Engil, on behalf of both the developer and the Engineering, Procurement and Construction (EPC) contractor.

“We have anticipated this project for close to 10 years, all the while relying largely on local expertise,” explained Emmanuel Rugambwa, a Strategic Investment Analyst at the Rwanda Development Board. “When we approached the ALSF, they swiftly helped us procure the required expertise to structure the project such that it attracts private capital. Since then, we’ve had many banks express interest in joining the project. The ALSF grant also includes a capacity building component which ensures that the procured experts will train Rwandans to monitor the project’s development, as well as to structure future projects in a similar manner.”

The development of Bugesera Airport is aligned with Rwanda’s Vision 2020—an ambitious strategy which aims to transform Rwanda into a knowledge-based, middle-income country by the end of the decade—as well as the country’s Economic Development and Poverty Reduction Strategy (EDPRS).

As such, the Project is designed and is being implemented with the aim of generating socio-economic development in Bugesera, Kigali, and other parts of the Eastern Province. The airport will further sustain the development of the aviation sector by backstopping the growth of RwandAir with new facilities and training opportunities. The project is expected to provide approximately 2,000 jobs for local residents.