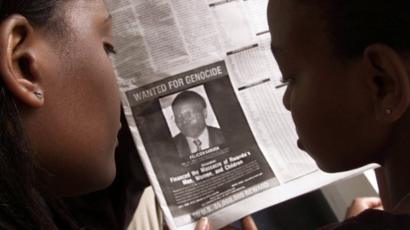 Renzaho cracks random stories with relatives of his victims while sitting peacefully with them. But when the discussion shifts to the 1994 Rwandan genocide against Tutsi, he is overwhelmed by remorse.

On April 7, 1994, the first day of the three-month-long genocide that killed over 1 million people, a brigade commander, police officers and local leaders arrived in Ntunga, and ordered all able-bodied youths to follow them to hunt for soldiers of Rwanda Patriotic Army (RPA), the armed wing of the current ruling Rwandan Patriotic Front (RPF).

Renzaho, who was 17 years old at that time, picked a machete, followed them to storm a home where the RPA soldiers were suspected to be hiding. One elderly woman called Leocardia Mukakibungo, who was said to be a member of the rebel camp, was one of the first people killed on that day.

Fearing being arrested after the genocidal regime was overthrown by the RPA, Renzaho fled to on of Kigali’s urban areas in July and stayed there until 1996 when he returned to Ntunga. Because of worrying about retribution by the people whose relatives were killed by him, he handed himself over to the authorities and was imprisoned for 10 years.

While in prison, inmates were sensitized on confessing crimes during the genocide to facilitate the work of Gacaca, Rwanda’s traditional conflict resolution mechanism, to process criminal cases during the genocide, Renzaho offered to go and confess his crimes before Gacaca judges, where he was handed a six-year jail term. Since he had already served 10 years in jail, he was released.

After being released, he spent time piecing together what had happened. Haunted by his acts, Renzaho gathered the courage to approach survivors to ask for their forgiveness.He started by greeting them to gauge their response when they met in the trading center.

Later he gained more courage and visited the home of one survivor Donne Kamali, whose mother was killed by him.”It was not easy meeting survivors. I was afraid, I had a lot of guilt and fear but I picked courage and visited Kamali’s home. I narrated how things transpired during the genocide. I was forgiven,” he said.

Renzaho said he has risen above ethnic divisions that manifested in the hilly country during the genocide. He also encouraged others he knew had played a role in genocide to confess their crimes.

Surprisingly, one of the children whose grandmother he killed is now his Godfather. “This is a symbol of unity and reconciliation. We now meet often,” said Renzaho, who sometimes looks for pasture from survivors’ home for his livestock.

The crimes used to haunt him, now he feels relief in the heart after receiving forgiveness. “Now I feel like a freeman.” The genocide perpetrator is also a member of non-governmental organization, Mvura Nkuvure, which was established to promote unity and reconciliation between the genocide perpetrators and survivors.

Kamali, the survivor and also a member of the reconciliation organization, called on other perpetrators to ask for forgiveness like Renzaho.