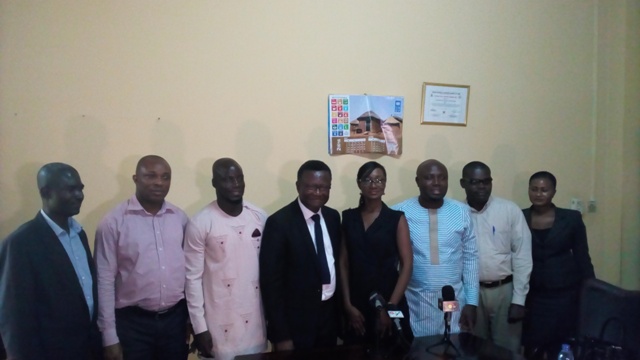 The visit, which was led by a team from the organizers, Primeval Media and Appiah, was to officially invite the chairman of the NPC, to the Vodafone Unity Match 2016.

Appiah said, “I am honoured and ready to serve my country in this special year for Ghana, this unity match is going to be fun as we use football to promote peace and unity before, during and after the elections and it is on this that I have officially come to invite you to be part of the event”.

Professor Asante said “I would lend my moral support to Stephen Appiah and his colleagues and I urge all Ghanaians to help Ghana win after the elections, but not a political party.”

The Brand, Marketing and Communications Manager of Vodafone, Madam Akisi Ackah acknowledged the good work Primeval Media is doing and pledged the commitment of Vodafone to to the event.
“It is a laudable idea and an opportunity to demonstrate our commitment to our customers and Ghana as a whole,” she stated.
The Vodafone Unity Match, is aimed at promoting peace and unity before, during and after the election 2016 and the brain child of sports event house, Primeval Media and proudly by Vodafone Ghana.

Appiah who was full of joy thanked Primeval and Vodafone for helping push such a great idea to maintain the peace that exist in the country.

The two legged games would come off in June 8 and 11 in Kumasi and Accra respectively as Stephen Appiah XI take on Kumasi Asante Kotoko in Kumasi and the Black Stars in Accra.