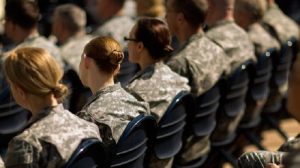 The chief of the main opposition party said Thursday that South Korea should seek the redeployment of U.S. tactical nuclear arms to put it on “equal footing” with North Korea in future denuclearization negotiations.

Hong Joon-pyo, the leader of the Liberty Korea Party, made the remarks during an interview with U.S. news cable network CNN, redoubling his calls for the re-dispatching of the nukes withdrawn from the country in 1991 to counter growing threats from Pyongyang.

“The North’s nuclear development program has come to its final phase. We have to engage in negotiations later after the redeployment of tactical nukes to the South,” he was quoted by his office as saying during the interview.

“This means that we will be on equal footing with the North,” he added.

The hawkish politician was responding to a question of whether he has in mind any viable way to denuclearize the North.

Underscoring the need for Seoul to explore a tit-for-tat nuclear option, Hong pointed out that the North’s nuclear weapons are in the hands of the “vicious, unpredictable, young” leader.

Amid Pyongyang’s continued provocations, including last month’s nuclear test, the LKP has stressed the need for a “nuclear balance of power” with the wayward neighbour, which it says now, enjoys a “nuclear monopoly.”

The Seoul government has dismissed the proposal. It has stressed its non-proliferation principle and argued that the redeployment would make its rationale for the North’s denuclearization crumble.