The Saint Dominic Savio Mass Servers Association of the Sacred Heart Cathedral Parish in Bolgatanga has honoured Mr James Nsoh, their Patron and Director for his selfless dedication and service to the church and the Association.

The honour which was in line with the celebration of his 85th birthday was to acknowledge and recognize the crucial role he played in the lives of Mass Servers and helping to strengthen and sustain the Association.

Mr Nsoh, affectionately called ‘Jimmy or Ayoo’ was born on April 1, 1936, and became a Mass Server when he was an adolescent. He has contributed to nurture many of the members of the association, some of whom have become priests and responsible persons in the society.

The Mass Servers presented a citation and a cash amount of GHc2, 000.00.

Mr Justice Anona who read the citation on behalf of the Association, described Mr Nsoh as someone who discharged his duties, especially in the training of altars boys with dedication and distinction.

“From your childhood days with the SMI Sisters, you grew to work in the vineyard of the Lord. You later joined the St Dominic Savio Mass Servers in the early part of 1958 and later became the patron of the society.

“Because of your love for the society, you had to sacrifice your job as a social worker by refusing to go on transfer to Garu and even had to subsequently resign from your job in 1978 to enable you train and nurture these Mass Servers, a duty you discharged faithfully with dedication, diligence, dexterity, decorum and distinction.

“The fruits of your services to the Church have yielded good morals and discipline among young men in their various fields of work. In fact, you are the brain behind a good number of young men becoming priests. You played a vital role in the formation of good marriages and families among these young men”, part of the citation read.

Reverend Father Samuel Atinga, the Cathedral Administrator, Sacred Heart Cathedral Parish, noted that the work of Mr Nsoh had great impact on the lives of many young men not only at the Parish level but the entire Catholic Diocese of Navrongo-Bolgatanga.

Reverend Father Atinga who was trained by Mr Nsoh before becoming a priest noted that most of the priests in the diocese went through the hands of the Patron as altar boys which played critical roles shaping their calling to the priesthood.

He acknowledged the contribution of Jimmy to the growth and strength of other groups and societies in the church which had made Sacred Heart Cathedral Parish stand out, indicating, “we cannot find words to thank Jimmy enough, we owe him more than we can possibly pay, what we can do is to continue to pray for him.”

Reverend Father Dominic Apee, a Visiting Priest from Ouagadougou who also received training from Mr Nsoh as a Mass Server, described him as a father who loved the success of his children.
Mr Nsoh said it was a pleasant surprise to know that his work had been recognized and had positive impact on the lives of people.
He thanked the association. 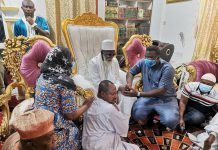