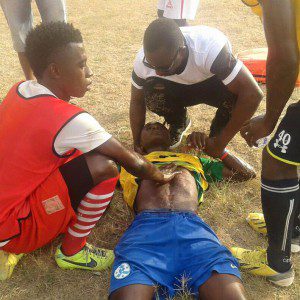 Adams, who has returned to his native Ghana, was at the Sunyani Coronation Park to watch the training session of the second-tier side.

BA United youngster Ebenezer Badu dropped to the ground motionless after he collided with a teammate but there was no medics available to salvage the situation.

The ex-Ghana youth star popped up to popped up to administer a Cardiopulmonary resuscitation (CPR) which revived the player before he was rushed to the Sunyani Municipal hospital.

SHOCKING:…I was at the training grounds of B/A United today and a terrible scene happened just in front of me.Two players crashed each other today during the training session and one collapsed,” he wrote

“What was more strange to me was that,there was no doctor ,physiotherapist or even ambulance around and more over people around too were afraid to go close to the scene but as a spectator too I got to do what I know to safe the little boy life and thank God I did what I suppose to do about 5-10 minutes and finally the boy came back to life before he was taken  to the sunyani municipal hospital…

Many complain why footballers are been paid much money and why they drive and wear expensive things but they never think of what can happen Within a second on the field of play….

“Thank God the boy is responding to treatment and I know Insha Allah he will come back strong and continue doing what he loves doing and that is football….

“We thank the Almighty Allah for his life alhamdullilah.”