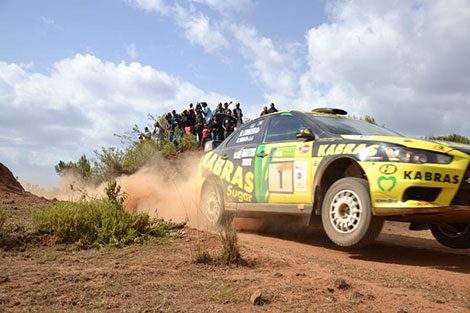 Aslam Khan and his brother Arshad Khan have entered a Porsche Carrera 911 that they will be testing in the Classic in November. The Porsche 911 is being prepared at the ALS workshop at Wilson Airport.

Seven-time German Champion Mathias Kahle, who will make his debut in the world?s toughest marathon rally in November, was recently in Kenya to test the suspensions of the Datsun 260Z, which is expected to be ready for the nine-day event that will cover some of the most rugged stages across Kenya and Tanzania.

?The adjustments we made to the suspension were really good. The car felt perfect in all conditions, ranging from wet to dry and from stony tracks to dusty conditions. I still lack experience with a right-hand drive car but we are well prepared for the rally,? said Kahle at the end of his test drive around Suswa.

It was also time for his navigator, Thomas Sch?nemann to familiarise himself with the types of notes that are commonly used in the rally, where no competitor is allowed to visit the rally stages prior to the start of the KQ-sponsored event.

?The road book system of the Classic Rally is similar to the one used on the Dakar Rally where stages remain concealed. Since we have participated in the Dakar seven times, this is perfect for us,? said the German, who will relish his childhood dreams to compete in one of the most famous rounds of the Safari Rally.

Meanwhile, preparations to stage Eldoret Rally are at an advanced stage.

This makes up the fourth round of the KCB Kenya National Rally Championship 2015, which has been to Kisumu, Meru, Voi and Kajiado.

?Pipi Renu has helped compile the route for our rally on July 4. We are now waiting for a member of the Rallies Commission to come and check the final route very soon. With the help of Mr NS Lochab, I have taken the initiative to give the drivers a smooth rally and we are getting the roads filled and graded. With the support of NS Lochab and Jazzy Rai, we have graded and included an exciting fast Forest Stage. I am happy also for the Club to have been accorded the support of the County Government,? Pater said.

Eldoret Rally will feature a Competitive mileage of 142.2 km and a Liaison Distance of 111.5 km.

By Odero Charles, The Standard