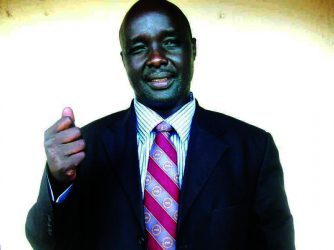 The company is expected to install the infrastructures and manage the system that would be rolled out in the next financial year.

Governor Simon Kachapin who oversaw the launch said most of the county allocation goes to salaries hence there was need to boost revenue collection.

He added that the new system will ensure maximum utilisation of all the avenues for revenue collection.

Mr Kachapin said the world is going digital and the county has to follow suit by embracing the new technologies to maximise efficiency in service provision.

The semi-arid county was rated top among the 47 counties in local revenue collections after surpassing its target by 76.3 percent in the last financial year.

On his part, Mr Kapelile said the new system would help seal loopholes and enable the county provide better services to the electorates.

?We have already awarded Safaricom the contract to undertake the automation and at the moment, we are working out on the contracting agreement before the programme begins soon,? he said.

He added that the system will entail the use of mobile money transfer services, which will ease payment of revenues to the county government by local investors.

The director said the county targets to collect up to Sh150 million in local revenues against the Sh100 million mark set by the National Government.

The county revenue collections boss pointed out that the share of national revenue for the semi-arid county set by the Commission on Revenue Allocation was meagre for the development needs of the region.

According to director, the move to automate revenue collections was necessitated by inadequate allocations ? necessitating the need to enhance collections to boost its budget.

?My department is currently mapping collection centres as well as sealing all the loopholes to improve its revenue base,? he said.

He asked traders to pay for their business licence fees in time to avoid being dragged into legal battles due to failure to adhere to the law.

Disclosing that policies have been developed to ensure increased revenue collections, Mr Kapelile called on all traders to support the county to achieve its target.

He said the county is set to undertake trainings for its revenue collectors on how to best use the new machines.

The revenue head spoke yesterday at the county headquarters during a flagging off ceremony for motorbikes that will be used by the revenue collectors.

By WILBERFORCE NETYA, The Standard