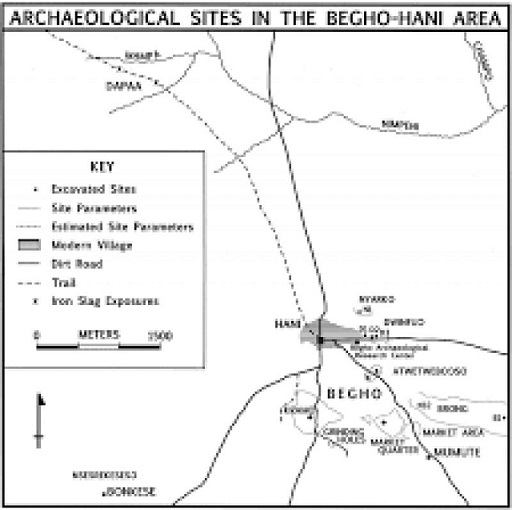 In 2016, the Begho Archaeological Project (BAAP) was instituted by Mr Daniel Kumah, a lecturer, Archeology and Heritage Studies at the University of Ghana (UG).

“The intention was to re-examine the ancient town of Begho (modern day Hani) archaeologically and further interrogate its importance during the Trans-Saharan Trade,” says Mr Kumah.

In 2020, archaeologists from the UG in collaboration with CONCOBEG, a local NGO at Hani, were awarded a grant by the Sankofa Small Grant Programme organised by the French Embassy in Accra.

The primary focus was to create awareness, build local capacity and educate the locals on the need and importance of protecting archaeological sites.

Subsequently, the project trained and empowered 15 locals in the area on protecting and preserving archaeological sites, as well supporting the establishment of a small community museum.

Occasionally, the trained locals would display artefacts in the museum, embark on community education, and serve as tourists guards as well as well preserve cultural and traditional monuments in the area.

Thankfully, the Old Begho Library, one of the first community libraries established in the area, was available and that paved the way for the development of the Begho/Hani Community Museum.

Built in 1974, through the initiative of one Dr Joana Dombrowski, with funding from Lions International (Indiana District), United States, the library was abandoned with the building left to deteriorate.

But, through the instrumentality of Mr Kumah, the community was able to secure funding from the French Embassy, renovated and transform the library into a local museum.

Interestingly, the facility contain and displays remains recovered from the second century AD to the mid-18th century AD.

These artefacts were recovered at the ‘Mumute site’ which dates to 1500 BC.

More so, the museum showcases several cultural artefacts on previous excavations, as well as photos and present archaeological research works conducted in the area.

According to oral accounts, ancient Begho town was noted to have had trade relations during the Iron Age or Medieval period with other city states in the West African Sub-region.

It was conducted through the Trans-Saharan Trade with peoples of the Middle Niger Bend around Jenne and Timbuktu, and its importance was linked to the gold, kola, and ivory trade from the 1300s to 1700s.

Begho’s significance has been traced through various methodologies and sources such as oral accounts, written sources (Arabic and European manuscripts) and ethno-archaeology.

In 1970 Professor Merrick Posnansky of the Department of Archaeology at the University of Ghana initiated a five-year project titled “the West African Trade Project” at Begho.

primary objective of the project was to investigate from an archaeological and ethno-historical perspective the beginnings and developments of long-distance trade between the Middle Niger bend (Mali) and the Ghana area.

The people of the Begho area have a strong oral narration of their histories. Generally, oral narrations have some shortcomings however, they are still vital today.
Oral accounts for example aided archaeologists to identify the various quarters of Begho, and the people believed they emerged from a hole known as Bonso at the site of Nsesrekeseso in the area.

Interestingly, there are quite a number of Arabic manuscripts which describe the trading activities between Begho and Jenne.
Notable amongst them include Tarik al-fattash, Tarikh al-Sudan, Kitab Ghunja and Isnad al-Sudan.
Similarly, one of the European maps to be drawn on the Guinea Coast in the mid-17th century depicts Nsoco (Begho) as an important trading town.

Various research work carried out at Begho/Hani from the 1970s to the present suggest the area was habited by prehistoric people dating to 1500 BC.

There is also overwhelming evidence that supports early iron working activities by the second century AD and by the 11th century where the first nucleated settlement had appeared at Begho.

According to research, Begho area became an important town, largely due to its trading activities with city-states such as Jenne and Timbuktu from the 1300s to the 1700s.

These trade relations were not only restricted to the North, but also the Southern forest areas.

Due to the prosperity associated with the trade in gold, kola and ivory, by the 15th to 16th century AD, Begho was said to have been one of the populated places in West Africa.

Mr Kumah explained the establishment of the Museum greatly promoted tourism, not only at Hani, but the entire Tain District of the Bono Region and expressed the conviction that the museum would motivate, and spur the trained locals to develop interest in archaeology, and safeguard sites in the area.

He thanked the French Embassy for the support and added “we are optimistic this community museum would pave the way for the establishment of a bigger District or Regional Museum”.

This would go a long way to attract tourists, boost eco-tourism, create jobs for the people, enhance local economy and push the development of the area forward.