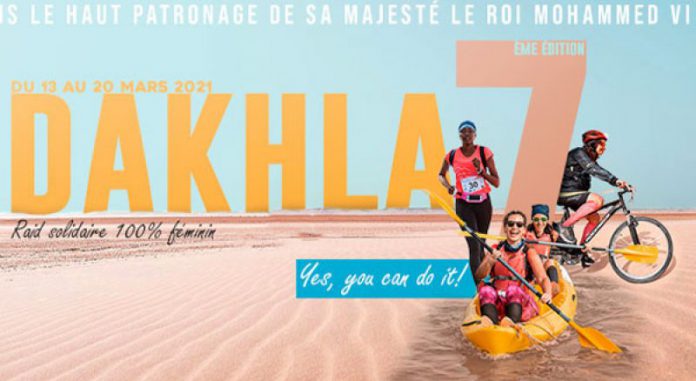 The 7th edition of the “Sahraouiya” 2021 Women’s Solidarity Raid, organized from March 13 to 20 in Dakhla, Morocco saw a remarkable performance by the representative teams of the Moroccan International Cooperation Agency (#AMCI).

The event saw a sterling performance from the “Malwanda” team, made up of Ernestine Umubyeyi from Rwanda, a student at the Faculty of Medicine in Rabat, Morocco and Aichata Ousmane Jattara from Mali, a student at the National School of Architecture (ENA) in Rabat, came in second.

The young students showed great physical endurance during the 2nd stage of the competition, which included very hard tests, in the “run & bike” of 3km, an orienteering race of 5.5km, a 7.5km run & bike, followed by a rope workshop to finish with a 7.5km run & bike to the point of arrival.

Another pair, also representing AMCI, and composed of participants from Saint Lucia and Ghana, has also carried out the adventure and appeared in the top 10 of the ranking.

The young athletes said that, they were participating for the third time in Sahraouiya, adding that they trained for a period of three months before the start of the competition.

They also noted that their motivation to participate in this raid was to defend good causes. “We came back this year again to give our all, have fun and defend our association.”

The African participants also indicated that Sahraouiya remains a “magical” experience which will mark them forever, because it taught them to “give the best” of themselves, to surpass themselves and to improve their skills attached to their goal.

The two teams defended the association “Dream Role Foundation” in Ghana, an association which works to help orphan children, and those in difficult situation.

For them, this is one of the reasons why they give their all to finish the race and always be up to the task.

“We do it for children who have not had the chance to have parents, and also to make proud our coach, the sports manager at AMCI Brahim Elhaddad, who was always there for us and encourages us at all times throughout the competition,” they added.

The participation of African teams is part of the strengthening of the policy followed by this sporting event with a social vocation, namely openness to Africa.