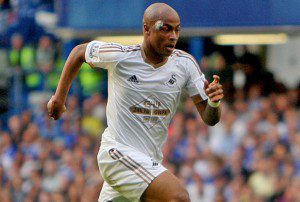 Sunderland manager manager Sam Allardyce does not want to be drawn into widespread speculation linking him with a move for Swansea midfielder Andre Ayew.

The 26-year-old has been strongly linked with a move to the Stadium of Light in the January transfer window.

The Black Cats are keen to sign the hugely influential Ghana international but have had their back-to-back offer rejected by the Swans, according to widespread reports.

But Sunderland manager Sam Allardyce has remained tight-lipped on his interest in the Ghana star.

“I can’t speculate on that. Me saying I’m willing to use Fabio would upset Fabio; me saying that Ayew is definitely someone I want for this club means that Swansea could say I have upset this player by saying that I actually want him,” he told reporters.

“If you look at past history, I think David O’Leary was probably the first to be punished for doing something like that. I don’t like anybody taking my money off me.”

Ayew, who has scored seven goals for Swansea this season, only joined the Swans from Marseille over the summer, but it’s clear that his exploits in South Wales have triggered interest in his signature.

Africa Remains at the Center of a 21st Century Cold War