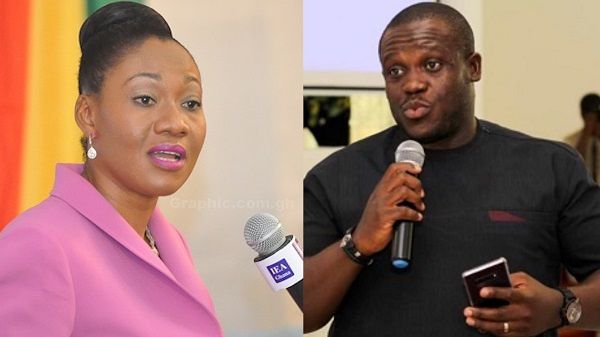 A Tema High Court has struck out an application by Sam George, Member of Parliament (MP) of Ningo-Prampram, that sought to restrain the Electoral Commission from holding a scheduled workshop in the Ningo-Prampram constituency.

The Court has also awarded cost of GHC 6,000 against the MP for Ningo- Prampram.

The Court presided over by Justice Eugene Nyante Nyadu, ruled that; “application brought under Order 55 is struck out as prayed for non-compliance. Cost of Six thousand Ghana Cedis (GHC 6, 000. 00) is awarded against the applicant”.

The order says (2) “within 14 days after filing the Notice of Application, the applicant shall file such number of copies of the applicant’s statement of case as the Registrar shall determine setting out fully his arguments and relevant statutes or decided cases he wishes the Court to consider”.

3 “If the applicant does not file a statement of case within the time stipulated in sub rule 2, the Registrar shall certify that fact to the Court which may dismiss the application for non-prosecution or make such other order as it may consider appropriate”.

When the case was called in Court today, the applicant and his lawyers were absent.
However, lawyer for the Electoral Commission was present.

The EC lawyer argued that the applicants have failed to comply with the provisions of Order 55, rule 6 (2 and 3) of the High Court Civil Procedure Rules, 2004 (CI 47), in that they have not filed a Statement of Case to allow the EC to respond same.

He added that the applicants filed the instant case on the 24th of April 2020 and as at today the 28th of May 2020, they have not filed their Statement of Case, to that end, the case ought to be struck out.

The decision of the High Court today is a sharp departure from its earlier ruling when it injuncted the Electoral Commission from holding an internal meeting with its Commissioners, Directors, Regional Directors, Deputy Directors and some Senior Headquarters staff, to plan on how to execute their constitutional mandate in the upcoming general election on December 7, this year.

Sam Nartey George, a Member of Parliament, through his lawyers Godwin Dzah and Justice Srem Sai, in an application ex parte, instituted an action seeking to injunct the EC from holding an internal meeting with its staff at the Escape Hotel in Prampram.

Their contention was that, should the EC go ahead with its planned meeting with its staff outside their office premises, they would be breaching paragraph (1) (a) (i) and (ii) of the Executive Instrument (EI) 64 of 2020, that imposed restrictions on meetings such as public gatherings, church services, etc in the country and that their meeting is also likely to cause the further spread of the novel Coronavirus, Covid-19 in Ghana.

The High Court in its ruling held that on the balance of convenience, “if the said gathering is not halted and ends up being a conduit for further spread of the Covid-19 virus and the applicant is infected, the resultant outcome may not be adequately compensated for by the award of damages.”

The court further ruled that, “in the circumstances, in view of the fact that the applicants rights under the Executive Instrument 64 of 2020 which is his right to survive the Covid-19 pandemic is threatened by the illegality the respondent is about to commit and for all the other reasons given including the pending application for Judicial Review, I am of the opinion that an injunction should issue”.

“The respondent and all persons claiming through the respondent are to refrain from holding the workshop or conference scheduled to take place at the Escape Hotel Prampram from the 24th of April, 2020.