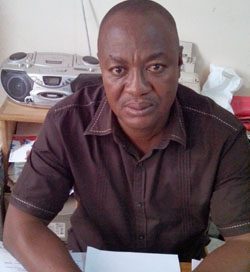 Members of the Kumasi Metropolitan Assembly (KMA) have confirmed the nomination of Mr Samuel Pyne, as the Metropolitan Chief Executive (MCE).

Fifty-five out of the 58 members present voted in favour of the nominee, giving him 94.8 per cent to validate the nomination in an election supervised by the Metropolitan office of the Electoral Commission (EC).

He also expressed gratitude to the assembly members and other stakeholders who helped in diverse ways for their support.

Mr Pyne pledged his commitment to work with all stakeholders to help speed up the development of Kumasi and called for unity and support to help make Kumasi a better city.

He said the overwhelming support placed a huge task on his shoulders, and pledged to give out his best to help in the development of the city.

“My endorsement has placed a huge task on my shoulders, but with determination, hard work and assistance from all the stakeholders, I’m optimistic of telling a success story at the end of my tenure,” he stated.

Mr. Pyne also pledged to work hard to actualise the vision of the President, Otumfuo, and his personal vision of making Kumasi a sustainable city once again.

He said his doors were opened for constructive criticisms and positive suggestions to help achieve the greatest agenda of the Metropolitan Assembly and pledged to work hard to improve sanitation in the city to help restore its name as the Garden City of West Africa.

Mr Francis Asenso-Boakye, Member of Parliament (MP) for Bantama, said jointly all the MP’s in Kumasi would support the Mayor as he assumed office.

He appealed to all the stakeholders, including the traditional leaders in Kumasi to give the Mayor their total support in the discharge of his duties to bring development.

Mr Stephen Ofori, the Presiding Member of the Assembly, pledged the support of the members of the assembly to the new Mayor to help speed up development in the city.