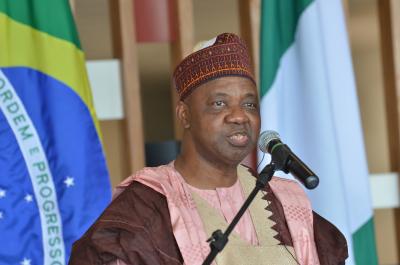 Vice-President Namadi Sambo said?on Monday?that the PDP-led Federal Government would construct additional 20,000 km of tarred roads in the next four years, if re-elected on?Feb. 14.
Sambo, who stated this at the PDP presidential rally in Ilorin, said the government had successfully constructed about 20,000 km of tarred roads across the country in the past four years.
According to him, President Goodluck Jonathan?s administration has successfully transformed the nation?s economy, making it the best in Africa.
“Today, the opposition are talking about the economy, the economy already Mr President has transformed it. Today, Nigeria is the best economy in the African continent. It is not just by accident but the policies that Mr President has put in place and the actions he has taken.
“When we came in, the power generation in Nigeria was about 2,000 megawatts. Today, I?m happy to inform you that we are generating over 4,500 megawatts in this country and we are moving forward. Mr President has transformed the power sector.
“We have privatised the generation and distribution of power in Nigeria successfully, one of the best privatisation that has been carried out all over the world.??
According to Sambo, the ongoing transformation of the economy is not by accident but through well-designed strategies by the PDP-led administration in the country.
He, therefore, charged the people of Kwara to come out en mass and vote for Jonathan/Sambo ticket as well as other PDP candidates in the?Feb. 14 and Feb. 28general elections.
“The reform of the economy of Nigeria, as I said, was not by accident, it is by the experience, it is by planning and development that the President put in place under the Peoples Democratic Party.
“I?m therefore, calling on all of us here to send the message that Mr President is transforming Nigeria, is moving the economy of Nigeria already forward and that all of us from Feb. 14, 2015, we should vote for Mr President, vote for our senators and vote for our members of the House of Representatives.
“And the?Feb. 28, we should vote for our governor and our members of the State Houses of Assembly.??
In his remark, Senate President David Mark said the electorate in the North Central zone of the country had already decided to vote for the Jonathan/Sambo ticket in the?Feb. 14?presidential election.
Mark, who described the losing of Nasarawa to the opposition party in 2011 as ??a mistake?? on the part of the PDP, assured that Kwara and Nasarawa states would be brought back to the PDP in?Feb. 28?governorship election.
“We want to say very emphatically in the North Central zone that we will vote massively for PDP, we will vote for you as President of this country.
“I want to assure you Mr President that the North Central zone will give the highest votes in 2015.
“We are going to vote massively for all our governors.??