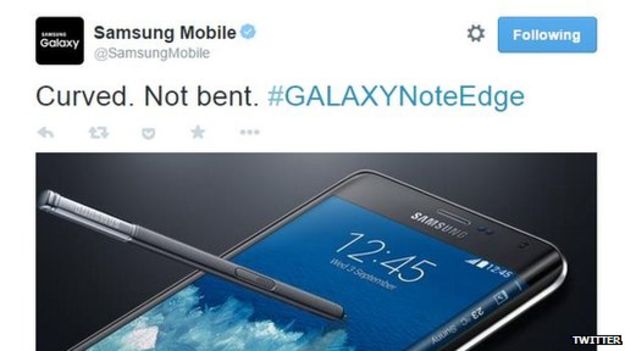 The allegations have been made by a company that sells smartphone protection plans.

Samsung said that the results ?may mislead consumers? and called on the firm to carry out a revised test.

But one expert said it highlighted the danger of mocking a competitor.

Last September, at a time when there were multiple reports that the new iPhone?s aluminium shell left it prone to damage, Samsung posted a tweet stating that its own Edge phablet was ?curved, not bent?.

Then in February, at the S6 Edge?s launch event, Samsung?s mobile division marketing chief paused for applause and laughs when she boasted about the new handset?s design in a presentation containing several comparisons to Apple?s models.

?Not only does [the glass] look great but it?s super tough ? in fact, it?s the toughest in the market,? said Younghee Lee.

?Also the special metal that we use is 50% stronger than the metal in other high-end smartphones.

?My first language may not be engineering, but I do know that this [is] tough [and] will not bend.?

Samsung is not the only company to have exploited criticism of Apple.

HTC andLG also posted tweets at the height of last year?s controversy, with LG going so far as to mark one of its posts with the hashtag #bendgate.

Apple later said that damage to the iPhone 6 Plus would be ?extremely rare? during normal use ? a similar point now made by Samsung about the S6 Edge, which goes on sale in the US and UK next week.

The current allegations are based on tests carried out by SquareTrade, which used machinery to simulate forces that it said might be experienced by a handset left in a back pocket as well as attempting to identify the force under which different models experienced ?catastrophic failure?.

Both the S6 Edge and iPhone 6 Plus deformed when a force of 110lb (50kg) was applied. The screen on Samsung?s phone cracked at this level, but the iPhone?s did notHTC?s latest phone ? the One M9 ? did not bend until 120lb, at which point it also broke and became unusableThe S6 Edge?s breaking point was 149lb, at which stage it ceased to functionThe iPhone 6 Plus stopped working at a force of 179lb

An accompanying video suggested that S6 Edge owners were at risk of a ?pocket full of glass? if they put their handsets under too much pressure.

In response, Samsung said it was confident that its phones would not bend ?under daily usage?.

?The normal force that [is] generated when a person presses the back pocket is approximately 66lbf (30kgf),? it added.

?Our internal test results indicate that the Samsung Galaxy S6 and S6 edge are not bendable even under 79lbf (32kgf), which is equivalent to putting pressure to snap a bundle of five pencils at once.

?Secondly, even though both front and back sides are exposed under the same level of pressure in normal circumstances, this test does not show the strength of the back side.

?Some smartphones have different [levels of] durability in each [of their] front and back sides respectively. SquareTrade has only tested the front side, which may mislead consumers about the entire durability of smartphones.?

SquareTrade has issued a follow-up statement stating that it endeavoured to perform its tests ?in an unbiased manner?.

?We welcome Samsung?s invitation to test its devices again with our Bendbot and release the results publicly,? added spokeswoman Jessica Hoffman.

One independent expert agreed with Samsung that consumers should not be concerned about the durability of the S6 Edge, but added there was a lesson to be learned.

?This is only a story because it made fun of Apple when it launched the iPhone,? said Francisco Jeronimo, research director at the consultancy IDC.

?You?d need to put a lot of pressure in a very specific way to break it.

?But it demonstrates that every vendor needs to be very careful when they compare their devices because it can backfire on them.

?I think that?s the biggest lesson for Samsung: next time if it sees a competitor having a problem, it needs to be a lot more careful unless it is 100% sure it would not face the same criticism.?

Samsung to enhance security systems after reports of stolen data