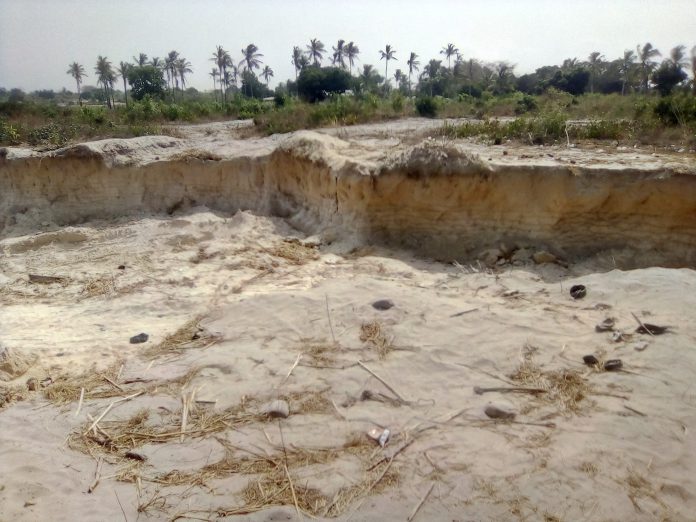 There are intensive activities of illegal sand winning/mining activities in some communities in Aflao which his exposing the vast vegetation, tourist facilities, lives and farmlands to the ravages of the degradation.

This unfortunate development is happening at the full glare of CEPS, the Ketu South district Assembly and the Environmental Protection Agency (EPA); but who are doing very little to stop the situation.

Investigations conducted by this Reporter revealed that, the illegal sand winning activity is seriously being carried out in Kpoglo, a community in Aflao on a vast land located few meters away from the CEPS Barracks in Kpoglo.

The sad part of it is that, trucks bearing Togo Registration numbers are allowed to enter the community to win sand in large quantities and drive away through the borders to Togo with ease at the full glare of Custom officials.

It is evidently clear that the rate of replenishment of sand from the sea is less than the rate of extraction. The difference manifested itself in the rapid erosion and vast degradation of the land.

During a tour to the “Galamsey” pits, it had been observed that majority of the trucks which came in to win sand are from Togo with Togo Registration numbers.

Over 40 trucks troop to the Kpoglo community on daily basis to win sand.

The question the arises as to whether these Togolese Trucks have the permits to invade Ghana and win sand in such large quantities, and whether the District Assembly is aware of the dangers their activities pose to the livelihoods of the people around and the vast environmental degradation with its attendant effects, and what revenue if the Ghanaian government deriving from this activity if indeed, it has been sanctioned/permitted for them to mine the Ghanaian sand for export to Togo.

Underground investigations however indicate that, some officials from the EPA, the Ketu South District Assembly and CEPS are allegedly involved in granting these Trucks access into the country to do the sand winning at an alleged fee which probably does not go into the State coffers.

The act is however gradually but steadily endangering the lives of the people residing along the communities and even those residing many miles away.

The theft of Ghana’s resources by some Togolese businessmen, who have connived with some Ghanaians officials, is a direct cause of erosion along many shorelines including Aflao.

Another major impact of sand mining is the loss of protection from storm surges associated with tropical cyclones and tsunamis.

The sand extraction becomes difficult to recognise as the beach readjusts to a new profile after a few storms, however Kpoglo where this activity is fast developing is several miles away from the Sea making it very difficult to replenish after the extraction.

There are fears that the communities in Aflao which are severely being hit by the activities of these illegal sand miners will be faced with strong tidal waves, which may sweep away homes and destroy properties.

Considering the danger such activities pose to the environment and its attendant loss of revenue to the state, the residents have condemned such illegal acts, which are posing grave dangers to our environment.

Speaking to an opinion leader in Aflao, Afatsawo Kalala, he said they do not accept that sand winning is a source of livelihood for many people because the impact of the act makes many more people including the state worse off while only a handful benefit from such illegal acts.

He said, the Ketu South District Assembly must be made to give answers as to why Togolese Trucks would be allowed into their communities in Aflao to win sand.

He also questioned the tax component these illegal miners are giving the Assembly and for that matter the State.

Although he asked these questions, he doubts if the Assembly is getting any revenue from this activity but for a few officials who are exploiting the system for their personal gains.

Afatsawo Kalala said the time has come for the authorities to take firm action to save the remaining land and beaches from further destruction and this can be done by arresting people and prosecuting them to serve as a deterrent.

“It will therefore be prudent for the district assembly and EPA to wage a relentless war on the illegal sand miners to bring the situation under control if only they have the interest of the people at heart,” he said.