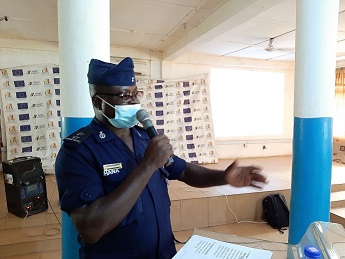 The Police Command in the Builsa North Municipality of the Upper East Region has appealed to members of the public to support the Command with extra fuel to boost patrols in the Municipality.

“What I will request is additional fuel support. Anybody ready to support us with additional fuel is welcome because that is mostly our challenge”, the Municipal Commander appealed.

ASP Amankwah made the appeal when he schooled participants on how to prevent violent extremism, at a youth activists engagement workshop on violent extremism organised by the National Commission for Civic Education (NCCE) in Sandema.

He also appealed for motorbikes to aid their patrols in the area, explaining that “There are certain places we cannot go with the vehicle. We are appealing for jungle motorbikes. I have forwarded some names to the Regional Headquarters to be trained for that purpose.”

He said Navrongo and Paga Police Commands were using motorbikes to aid their patrol activities, “In Bolgatanga, that is what is helping them now to patrol certain places vehicles cannot go.”

The Commander said considering the numerous routes within the Municipality mostly used by market women, especially on market days, “If we have motorbikes and then on market days we put even one on the Siniensi road and then one also in the Wiaga and Kadema areas, on market days, they will play surveillance.”

“And when it is Fumbisi market day, they will extend their services to those areas. At least, it will be of good service to all of us here. So I am appealing, we need motorbikes urgently,” ASP Amankwah, who also has oversight responsibility of the Command in the Builsa South District said.

He said security was a shared responsibility and called on residents of the area to play their roles as citizens to support Police Officers to effectively discharge their duties of maintaining law and order.

ASP Amankwah further emphasized the need for watchdog Committees in the Municipality, saying “Community watchdog is very important. Criminals cannot operate when they see that there are two or three youth monitoring their movements.

“Let us be security conscious and protect our own and the community we live in. Security should not be left with the Police alone. When we have neighbourhood Watchdog Committees, they prevent crime in our communities. We have a shared responsibility,” the Police Commander added.

He entreated citizens of Buluk land to observe their surroundings very critically and report suspicious characters to the Police with accurate descriptions to enable the Police to trace such characters.
The Commander noted that most residents usually gave wrong descriptions and directions to Police officers, “Let us be reliable and prompt in information delivery.”