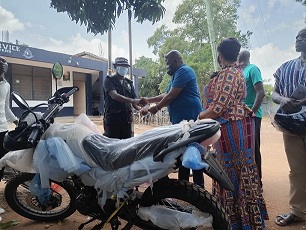 Mr Thomas Kofi Alonsi, the Director-General of the Ghana Maritime Authority, has presented a brand new motorbike to the Ghana Police Service in the Builsa North Municipality of the Upper East Region to support fight crime in the area.

At a brief gathering to present the motorbike, Mr Alonsi said the Ghana Police Service in the Municipality needed to be adequately supported to enable them to conduct their patrol duties, especially in areas where Police vehicles could not easily go.

“As an indigene, I realised that the Police needed to be supported to conduct their patrols, hence the decision to acquire this motorbike so that they can use it to augment the vehicle they already have,” the former Chief Executive of the then Builsa North District said.

Mr Alonsi acknowledged that the Police in the Municipality needed more equipment and not just a motorbike to enable them effectively discharge their duties and gave the assurance that “With time, if we acquire more resources, we will add.”

The Director-General, who was in the company of the Builsa North Constituency Executives of the New Patriotic Party, urged officials of the Police Service to properly maintain the motorbike and use it for the intended purpose.
Madam Vida Akantagriwen Anaab, the newly elected Municipal Chief Executive (MCE) for the area, thanked the Director-General for the support.

She called on citizens of Buluk, in and outside the country, to support the area in diverse ways to propel development.

The MCE-elect, who would head the Municipal Security Council, stressed the need for the peace and security of the Municipality to be maintained.

Receiving the motorbike, Chief Inspector Emmanuel Opoku, the Station Officer of the Municipal Police Headquarters, thanked Mr Alonsi and said “This motorbike that you have given to us will go a long way to help us combat crime in this Municipality.”

He appealed for more support to the Service to enhance their crime-fighting mandate in the Municipality.

At a recent workshop on violent extremism organised by the National Commission for Civic Education (NCCE) in Sandema, the Municipal Police Commander, Assistant Superintendent of Police (ASP) Francis Kwasi Amankwah appealed for motorbikes to aid Police patrols in the area.