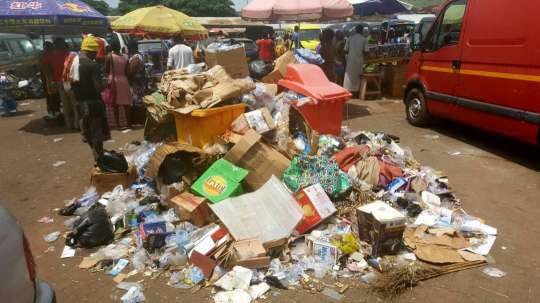 Traders at Tema Community Seven has called on Tema Metropolitan Assembly (TMA) to improve on sanitation conditions at the market.

In an interview with Ghana News Agency (GNA)in Tema, Madam Vida Yeboah Okyere, a trader said, the market lacked amenities such as the communal refuse site, toilet and washroom facilities.

As a result, some traders and customers have developed the penchant for dumping solid and liquid waste around, thereby choking the drains.

“We do pay tolls to the TMA hence we expected them to collect the refuse regularly, but they are not. We had to pay people to come and clean the market for us,” Madam Okyere claimed.

“Imagine married women like us, exposing ourselves in the public to urinate, it is not fair. We are faced with difficulties when we wanted to ease ourselves also”, she added.

Madam Alice Yeboah, noted that the lack of the toilet facility is really a problem, either you go to the nearby house to plead to use their facility or you are forced to use other unauthorized means to respond to natures call in public.

She said initially a parliamentary aspirant provided a mobile toilet but right after the election, that mobile toilet has been withdrawn. “I nearly disgraced myself three days ago when I had to attend to nature’s call at Community Eight Junction”.

Madam Vivian Asilevi, also told the GNA that the fight against the COVID-19 required hygienic conditions, as the market where food stuffs are sold was unhygienic.

She claimed that refuse could pile-up for almost a month or two generating stench in the market.
Mr Samuel Klomegah, an Auto Mechanic Repairer around the market also told the GNA that, the refuse dump was really posing a lot of health challenges.

He noted that sometimes people resort to burning of the refuse which also caused air pollution and harmful to the health the people around.

He called on the authorities to provide the market with a communal refuse skip and a washroom to improve upon their working conditions.