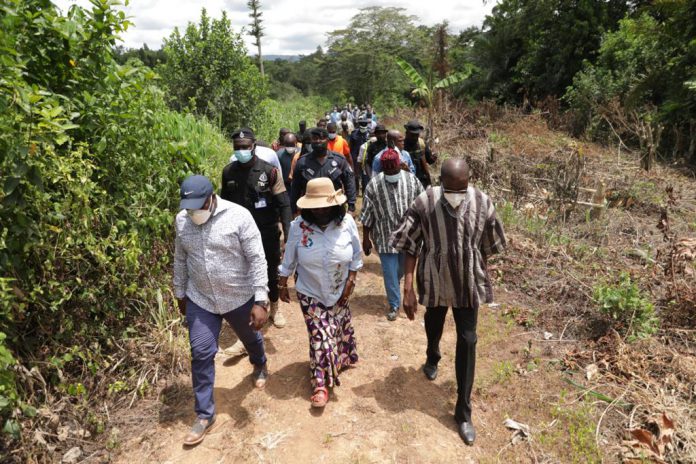 The Okyehene, Osagyefo Amoatia Ofori Panin, has underscored the need for Ghanaians to respect nature to ensure their communities and traditional areas were clean and healthy.

“In the olden days, our mothers will wake up around 4:00 a.m., and sweep the compound; there was nothing like dumping of refuse into the gutters, and for that matter, our gutters were clean and tidy,” he recounted.

However, he said it was regrettable that Ghanaians had brushed aside these good values and were rather dumping refuse into gutters and polluting water bodies, lamenting that now there was no longer respect for the rule of law.

These negative attitudes, he said, posed various health risks to the citizenry.

“Thus, we can deal with these sanitation problems, if as a country, we will defend and believe in the rule of law, and more importantly, respect the rule of nature in our traditional areas,” he stressed.

Osagyefo Amoatia Ofori Panin made the call during a courtesy call on him in his palace at Kyebi, Eastern Region, on Monday, May 17, 2021, by the Minister of Sanitation and Water Resources (MSWR), Madam Cecilia Abena Dapaah, who was accompanied by some chief directors from her outfit.

The visit was part of the minister’s four-day working tour in the Eastern and Ashanti Regions, aimed at assessing the state of water bodies and checking water treatment plants in the two regions.

According to the Okyehene, what worked for “our forefathers and ancestors” was that they had enormous respect for God’s creation, adding that practices such as “farming 200 feet away from water bodies went a long way to protect water bodies.”

“…and this worked even in an era where there were no law enforcers which even saw our forefathers drink from these water bodies,” he recalled.

He insisted that it was imperative that water bodies in the country were safeguarded at all cost.

“We must, therefore, not sit down and allow our water bodies to be destroyed by the practice of galamsey,” he averred.

The Okyehene, who was very passionate about the need to protect the country’s waters, said the lack of jobs should not be used as an excuse by the youth to venture into galamsey.

While commending the Akufo-Addo administration for its concerted efforts to nib galalmsey in the bud, he appealed to the government to look for funds to reclaim lands wantonly destroyed by illegal miners.

“…and the reclaiming of these lands can be done by engaging the youth to plant trees on them which will in itself be a job opportunity for them,” he submitted.

Furthermore, the Okyehene added his voice to the calls for the country to be decentralised to bring government to the doorsteps of the people.

“For example, decentralising the country will help decongest and rid Accra of the loads of filth and traffic, adding that “there is a limit to Accra,” he said.

Decentralising the country will mean that Ministries of Sanitation and Water Resources, Lands and Natural Resources, Local Government and Rural Development, Food and Agriculture among others can be moved to other regions, he suggested.

That, he said, will ensure efficiency in the governance system.

“What business, for instance, are the Ministries of Local Government and Rural Development, Food and Agriculture and Lands and Natural Resources doing in Accra?” he asked.

Consequently, Osagyefo Amoatia Ofori Panin said it was important that “we change our attitudes to help support the government fix the country.”

Earlier, Mrs Dapaah explained that the essence of her visit in the region was to look at the conditions of the water treatment plants of Ghana Water Company Limited (GWCL) and also assess the state of the water bodies in the region.

She said President Nana Addo Dankwa Akufo-Addo was committed and working hard to improve the lot of Ghanaians.

She was particularly happy about the state of cleanliness of the Kyebi township, and applauded the Okyehene for his efforts in that respect.

From the Eastern Region, Mrs Dapaah will move to the Ashanti Region where she and her delegation will undertake a similar exercise.