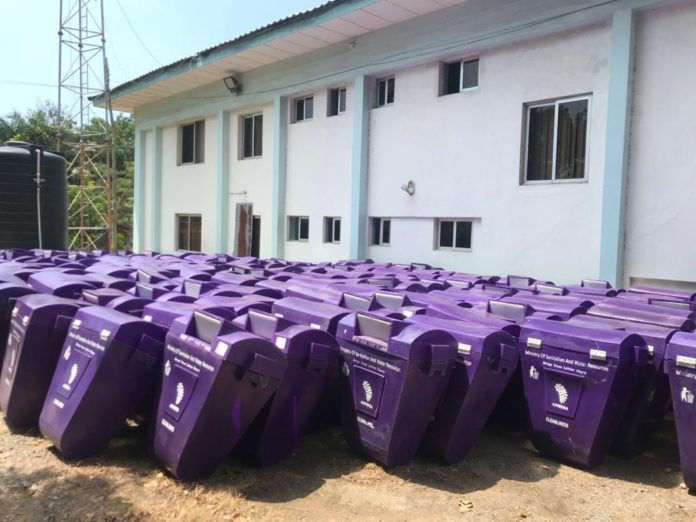 The Ministry of Sanitation and Water Resources on Monday donated 370 dustbins to media house across the country.

The Ministry also presented 130 refuse containers to Senior High Schools that participated in the 2020 National Maths and Science Quiz (NMSQ).

The bins for media houses were given through the Ghana Journalists Association (GJA) and aimed at enhancing the national sanitation campaign and promoting environmental cleanliness.

Mrs Cecilia Abena Dapaah, the Minister in charge of the Ministry, who made the donation, commended journalists for supporting the sanitation campaign and urged them to heighten discussions on sanitation in the country.

She said that was necessary because the campaign had helped reduced cholera and other sanitation-related diseases in the country.

Mrs Dapaah said it had also seen the construction of 122 house-holds toilets built in the last three and half years and water tankers for communities without potable water.

Mr Roland Affail Monney, President of the Ghana Journalists Association (GJA), expressed gratitude to the Ministry for the foresight and said the bins would help sustain the campaign against insanitary conditions in the country.

He said the bins came at the right time when the Association had committed to taking issues of environmental cleanliness to the doorsteps of the citizenry in support of President Nana Addo Dankwa Akufo-Addo’s vision of making the country one of the cleanest on the continent.

The GJA President said 35 of the bins would be in Accra, two for each media house, with each region receiving 20 bins.

Mr David Odjidja, the Headmaster of Presbyterian Boys’ Senior High School (PRESEC), who received the donation on behalf of the schools, thanked the Minister for the support and said the bins would help improve sanitation in the schools.