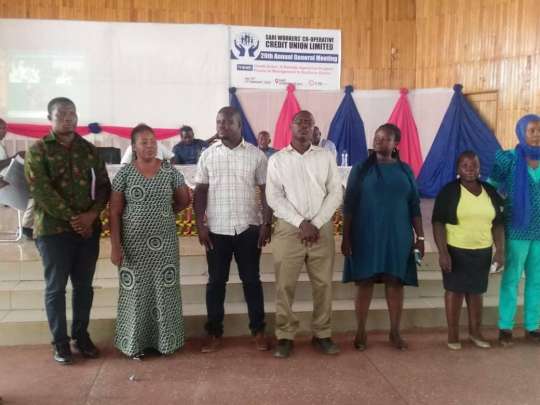 Members of the SARI Workers Cooperative Credit Union, for the first time in more than 15 years, have been paid a 17.5 per cent dividend for each share they hold for the financial year that ended on June 30, 2019.

Dr Mutari Abubakari, Outgone Chairman of the Board of Directors of SARI Workers Cooperative Credit Union, who announced this during the 29th Annual General Meeting (AGM) of the Union, held at Nyankpala, said the gains were made through the growth the Union recorded during the period.

He said during the period, membership of the Union and savings increased, and members, who took loans, also repaid as scheduled hence the increase in the Union’s total incomes.

The SARI Workers Cooperative Credit Union is a kind of savings and loans institution operated by workers of the Council for Scientific and Industrial Research-Savanna Agricultural Research Institute (CSIR-SARI) located at Nyankpala in the Northern Region, and its membership is open to not only CSIR-SARI workers, but members of the public.

Dr Abubakari assured members that a strong foundation was built for the Union, which had positioned it as a viable institution to respond to their needs.

Mr Henry Antoungba, Northern Regional Manager of the Credit Union Association, who spoke about growth of credit unions commended the SARI Workers Cooperative Credit Union for opening up its membership to even non-workers of CSIR-SARI, saying it would make the Union to grow.

Mr Antoungba advised members of the Union to continue to save as well as take loans from the Union and pay back promptly to help the Union generate income to run its affairs.

Meanwhile, a new eight-member Board of Directors of the SARI Workers Cooperative Credit Union was acclaimed and sworn-in during the AGM to run the affairs of the Union for the next four years.

It is chaired by Dr Doris Kanvenaa Puozaa, who is a Research Scientist at CSIR-SARI.