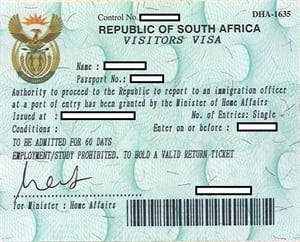 South Africa’s government in a bid to ease ways of doing business and boost tourism in the country, ha announced a number of visa waiver agreements with other countries, allowing travellers to enter the country without visas.

Minister of Home Affairs, Malusi Gigaba on Tuesday in Pretoria, announced that, Citizens from countries which will now no longer require a visa to travel to SA include Algeria, Egypt, Morocco, Ghana, United Arab Emirates, Qatar, Iran, Lebanon, the State of Palestine, Belarus, Georgia and Cuba.

These countries, he said joins UK, US, Germany, France, the Netherlands, Australia, Brazil and Canada whose citizens already have visa waiver agreements.
“We have implemented a visa waiver for all citizens of the Russian Federation and Angola, on 1 April 2017 and 1 December 2017, respectively, to travel to SA without having to apply for a visa,” Gigaba said.

Despite being part of the top 10 overseas tourism market, nationals from China and India still require visa to visit SA. Gigaba, however, said “my department is simplifying visa requirements for these countries.
This will include taking biometrics on arrival in SA, which will speed up getting through customs for tourists from China and India as well as allowing visa applications via courier and the issuing of five-year multiple entry visas.

“Easing movement in this manner will help in attracting larger number of tourists, business people and families.”
Business people from China and India will also be issued with a 10-year multiple entry visa, given within days of application. “They do not need to apply in person and can use courier services. This arrangement is meant to attract business people and prospective investors.”

Furthermore, Gigaba said that the development of the e-Visa is at an advanced stage and will be piloted in New Zealand by April 2019. “This will significantly enhance efficiency in the issuing of visas to tourists and business people visiting our
country,” he added.

Once concerns have been identified and addressed in the pilot phase, it will be rolled out in other countries.
These amendments follows the announcement by President Cyril Ramaphosa on Friday on changes to the visa regime as part of the economic stimulus and recovery plan to smoothen the clearance of travelers even through the busiest border posts.