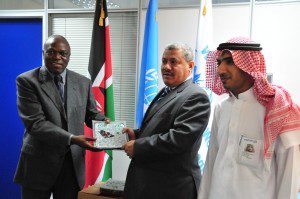 The Royal Kingdom of Saudi Arabia has for the third year running presented 50 tons of date fruits to the Government and people of Ghana.

According to the Charge d?Affaires of the Saudi Embassy, Nayef Abdullah M. Alfadhli, the presentation on behalf of the Custodian of the two holy mosques, the King Sulman bin Abdulaziz was as a result of the good rapport both countries enjoy.

Mr Alfadhli who was accompanied to make the donation by Sultan Al Sultan and Mohammed Al Sonied of the Kingdom?s Ministry of Finance said the gesture which has been sustained for the last three years was made based on the solid friendship and co-operation between the Kingdom of Saudi Arabia and Republic of Ghana and to enhance the frutious and constructive co-operation in various areas for the good and benefit of both countries.

In the pages of the Holy Book, The Qur?an, no fruit is mentioned more or highly prized than dates. The date palm tree which is an iconic image is so important to the Saudis earning a place on Saudi Arabia?s coat of arms. And, throughout the Middle East, the date palm is considered the ?tree of life.?

Date palms, like many other species of trees, live for more than a century and continue to grow throughout their lifetime.

The date is an edible Saudi Palm fruit which is exclusively produced in the Kingdom of Saudi Arabia.

Receiving the donation on behalf of government, the Director of Mid East Bureau of the Foreign Affairs Ministry, Leonard Daniel Mensah thanked the Saudi Kingdom for their kind gesture, and promised that Ghana will continue to maintain the friendship which exists between the two countries.

Mr Mensah added that the date had come at the right time for all Ghanaians especially Muslims since it was closer to the Holy Month of Ramadan.

He also conveyed the wishes and appreciation of the country for the enormous assistance Saudi Arabia gives to Ghana in the area of providing educational institutions, building mosques and providing hajj assistance to the country?s muslims.

The 50 tonnes of date fruit will be stored at the warehouses of NADMO.