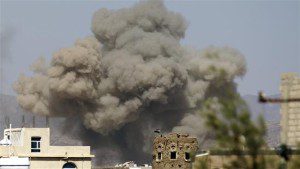 Saudi Arabia has continued its deadly military aggression against neighboring Yemen as the United Nations warns about the number of civilian casualties in the Yemeni conflict and blames Riyadh?s measures against the impoverished Arab country.

According to media outlets on Wednesday, Saudi warplanes targeted the district of Saqyan in the northwestern province of Sa?ada, killing at least four members of a family.

The Saudi fighter jets also pounded the districts of Ghamr and Razih in the province.

Reports also say that Saudi Arabi bombarded Yemen?s western province of Raymah, targeting the municipality building and the headquarters of security forces in the district of al-Jabin.

The Saudi airstrikes come as Spokesperson for the UN High Commissioner for Human Rights Rupert Colville slammed Saudi Arabia over the blockade it has placed on Yemen warning about the high number of casualties in the crisis. ?The coalition is also indubitably responsible for the naval blockade of Yemen?s main seaports, which UN humanitarian agencies have repeatedly stated is greatly exacerbating the extremely dire humanitarian situation affecting almost all of Yemen,? the UN official said.

Saudi Arabia launched its military aggression against Yemen on March 26 ? without a United Nations mandate ? in a bid to undermine the Houthi Ansarullah movement and restore power to fugitive former Yemeni President Abd Rabbuh Mansur Hadi, who is a staunch ally of Riyadh.

?During the reporting period, civilian casualties, including women and children, continued to be recorded as a result of airstrikes and indiscriminate shelling in residential areas by both sides to the conflict, which was taking place to a greater or lesser degree in 11 different Governorates. More civilians have been killed and injured by an increasing number of airstrikes targeting bridges and highways,? Colville added.