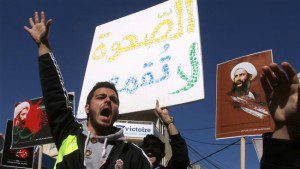 Saudi Arabia is planning to execute dozens of activists and dissidents, including women and teenagers, most of them without trial, the European Saudi Organization for Human Rights (ESOHR) has said in a report. Students take part in a demonstration on January 13, 2016 in Nabatiyeh, Lebanon, against the execution of prominent Shia cleric Sheikh Nimr al-Nimr by the Saudi regime.

Some 55 people are planned to be executed in near future. The people are currently behind bars over their roles in anti-regime protests.

The report said at least eight of those people are between 18 and 20 years of age, adding that they were allegedly arrested when they were minors. It said some of the detainees have been sentenced to death by the Saudi courts but others have yet to be officially charged.

The ESOHR said some of those suspects have been arrested only for expressing views that do not correspond to the official narrative of the kingdom on political and international issues.

The report comes more than two months after the Saudis put to death dozens in an execution spree across the country, sparking huge international backlash and an unprecedented escalation of diplomatic tensions in the Middle East. Among those executed was the respected Shia cleric Sheikh Nimr al-Nimr, who was convicted of terrorism charges. Many other people have received death sentences in Saudi Arabia on similar convictions, showing the zero tolerance of the kingdom for the political dissent.

Tallies gathered by some sources show that Saudis executed 153 people in 2015, putting the country atop the international rankings in exercising capital punishment. Riyadh says most of those executions were related to drug trafficking. Human rights campaigners have criticized the regime for the rising number of death sentences.

Activists and movements promoting positive social change to be honoured