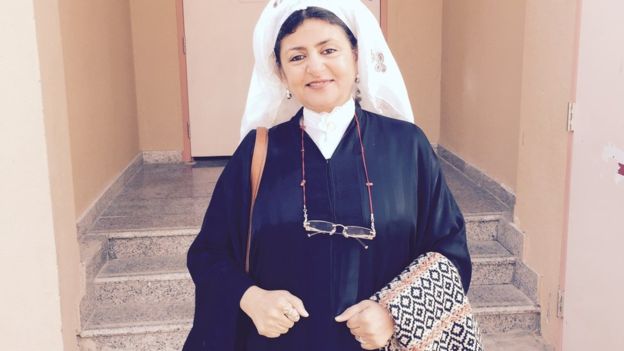 Women are also standing as candidates, another first, despite the conservative kingdom being the only nation where women are not allowed to drive.

A total of 978 women have registered as candidates, alongside 5,938 men.

Female candidates have had to speak behind a partition during campaign appearances or be represented by a man.

About 130,000 women have registered to vote, officials say. That figure still falls well short of male voter registration, which stands at 1.35 million.

Salma al-Rashed was the first woman to register to vote. “It felt really good,” she told the BBC. “Change is a big word but the election is the way to make sure we are really represented.”

Elections themselves are a rare thing in the Saudi kingdom – Saturday will be only the third time in history that Saudis have gone to the polls.

The decision to allow women to take part was taken by the late King Abdullah and is seen as a key part of his legacy.

In announcing the reforms, King Abdullah said women in Saudi Arabia “have demonstrated positions that expressed correct opinions and advice”.

Before he died in January, he appointed 30 women to the country’s top advisory Shura Council.

There are 2,100 council seats available in Saturday’s vote. An additional 1,050 seats are appointed with approval from the king.

The results of the elections are expected to be announced later on Saturday.