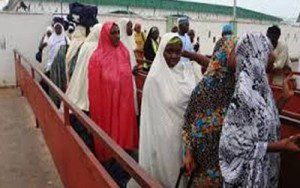 Alhaji Alhasan Abdulai of the federation of Muslim Councils of Ghana made this announcement in a closing prayer during the launch of Ghana’s gender policy document in Ghana meant to promote equal rights of women to education healthy and participation in decision making process in Ghana.

The feat chalked by the women in Saudi Arabia is due largely the hard work of gender activists in Saudi Arabia and in the whole wide world including Ghana. Her ladyship the Chief Justice Of Ghana Justice Theodora Wood, the Minister Of Gender Children and Social Protection Nana Oye Lithur, and Professor Akua Kuenyehia and other women received the news with happiness that vey soon women in Saudi Arabia would be liberated.

David Andrew Weinberg is a Senior Fellow at the Foundation for Defense of Democracies who has been following events in the kingdom has hinted that Women in Saudi Arabia were permitted to vote and run as candidates for the first time in local elections on December 12th in what news media widely hailed as a historic milestone, however he said according to results announced the next day, only 20 women were successfully elected to municipal council seats.
That means that Saudi women gained less than 1% of the 2,106 seats contested by public balloting but continue to face considerable discrimination both on and off the campaign trail.

The international community is full of praise for Riyadh on some of the more encouraging elements of the local election, praising the inclusion of female voters and “applauding the nearly 1,000 women who ran and participated as candidates.” Over 130,000 women successfully registered to vote and the vast majority of those registered female voters ultimately did cast their ballot, with turnout among that group reaching an encouraging 81%. We in Ghana also congratulate the kingdom of Saudi Arabia for allowing women to vote and be voted for into public office.
Yet female participation in the election faced considerable hurdles.

Many would-be voters were reportedly unable to register because the property, bills, or other documentation needed to prove their residency was held in the name of male guardians. Women had to cast their ballots at female-only polling sites, which were numerous as those allotted for men. Several women’s rights activists were disqualified from running, although at least one was reinstated after appealing the decision and speaking out to foreign media. Female candidates were also forbidden from addressing male voters face-to-face, closing off their access to the vast majority of voters.

Saudi women excel when they’re given the chance — they comprise of the kingdom’s university students, for example. But they made up only 14% of overall candidates, less than 9% of total registered voters, and less than 1% of winning candidates in the campaign.

Turnout as a whole was also poor. While 47.4% of registered voters cast a ballot, that figure amounted to only 702,542 votes cast in a country of over 20 million citizens. “Journalists and election workers clearly outnumbered voters during a visit to a Riyadh polling place organized by the Saudi Information Ministry,” one Western reporter noted.

This lackluster participation might have reflected the limited extent to which elections in the kingdom really matter.

Saudi Arabia has never held an election for national office. Members of its parliament are appointed by royal decree — as are members of the cabinet, who are typically not selected from the legislature. The king himself is his own prime minister.

The municipal councils contested on December 12th supervise urban construction projects and recommend local planning regulations. But they lack legislative power and do not decide how municipal funds are spent. One third of their seats are also appointed by royal decree.

Highlighting the capricious manner in which power is often wielded in the kingdom; King Salman replaced his education minister on the eve of voting without indicating any reason for the change. Education Minister Azzam al-Dakhil had been appointed less than a year earlier and was praised as a reformer and “accomplished administrator” at the time. King Salman also dismissed the only woman in the cabinet, Deputy Education Minister Norah al-Faiz, when he inherited the throne in January.

Allowing women to participate as voters and candidates in this year’s elections was originally the decision of Salman’s predecessor, his late half-brother Abdullah. Abdullah was considered more sympathetic to women’s issues, having appointed women to parliament for the first time in 2013.

Female Saudi citizens continue to face systematic discrimination at the hands of their own government.
The kingdom’s guardianship system forbids women from making basic life decisions without the approval of a male guardian, such as obtaining a passport and traveling abroad, marrying, or pursuing higher education. Hospitals and employers often also require such indications of male consent.

The kingdom also remains the only country in the world where women are forbidden from driving automobiles. That prohibition still applies even to the winning candidates in Saturday’s election.
Voting and winning seats in this weekend’s local race was certainly a first for those Saudi women who participated. But whether these results represent even a slow march toward progress is still open for debate.

Germany’s Greens to vote on proceeding with coalition talks

Security Council to Vote on Draft Resolution on Afghanistan Monday