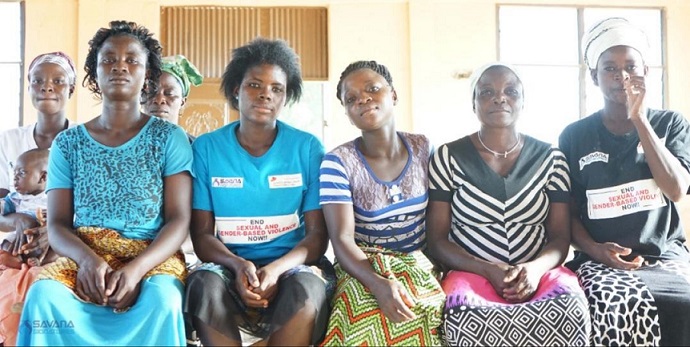 Savana Signatures with support from the Grand Challenges Canada, has implemented I-Matter project to reduce Sexual and Gender-Based Violence (SGBV) among women and adolescent girls in the Nkwanta North and Krachie East Districts of the Oti Region.

The project utilised the Ready Steady approach, an interaction strategy to engage community leaders, women, girls, teachers, health workers, and social justice institutions to discuss issues of SGBV and how to end the menace.

As part of activities to mark this year’s 16 Days of Activism, International Day for the Elimination of Violence against Women, some beneficiaries of the I-Matter project shared the progress and benefits of the project on them.

Abigail, a 15 year-old girl from the Katanga community in the Krachi East District, who is a beneficiary, said “Before I joined the Ready Steady discussion group, I didn’t know rape, defilement and child marriage were crimes.

I used to judge and frown on rape victims and teenage pregnant mothers. As a result of my participation in the discussions, I now know it’s not a shame to report perpetrators of these crimes and also support victims of abuse to receive justice. Currently, to make the community a safe place for girls, I share my knowledge with other girls so that they will protect themselves and their siblings from SGBV.”

Madam Adoyana, a 35-year-old woman from Naburn community in the Nkwanta North District said “I have been ignorant about reporting issues of rape and defilement although I knew they were wrong and barbaric acts.

I felt it was appropriate to be handled at home and not reported to the Police to save both families, especially the girl from stigma. Also, I never discussed issues of rape, and teenage pregnancy with my children, which I believed contributed to my daughter’s pregnancy at teenage.

My participation in the women group discussions has thought me a lot and I have begun discussing issues of SGBV and reproductive health with my children.

I now believe that perpetrators of these crimes, especially rape and child marriage should be punished by law and I advise women to report these cases and not be quiet about them.”

Madam Mpopiin, a 30 year-old lady from Kpassa in the Nkwanta North District recounted her experience with her boyfriend saying, “My boyfriend shirked his responsibilities as a father even though my family and I tried to talk with him but to no avail.

It wasn’t an easy experience as the news spread in the community. My unborn baby was called fatherless and me as a promiscuous woman. I heard of a group that supported women who are going through SGBV issues, so I approached the group facilitator with my problem and he led me to the Social Welfare Office where my boyfriend was invited.

After several discussions, he finally agreed to take responsibility for the pregnancy as all evidence proved he was the father of my baby. Since then, he provides the necessary financial support as agreed.

Madam Rahana Mohammed, Project Manager said the organisation had linked the beneficiaries, and also called on members of the public to reach out to the SHE+ Plus Helpline (Toll-Free: 080 00 11 22) to seek help on SRHR/SGBV issues through age-appropriate and real-time information, counselling and referral services.

She said: “The platform is handled by health professionals, it is confidential, free and nationwide.”

She added, “The 16 Days of Activism wished-for a renewed and strengthened individual and institutional commitment towards eliminating violence against women and girls. This includes increasing women’s rights to economic resources, uninhibited access to human rights institutions, and their power to fully participate and make decisions that affect them.