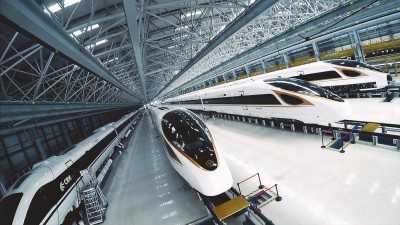 The conclusion that socialism with Chinese characteristics has entered a new era drawn by Chinese President Xi Jinping is a wise judgement based on reality as well as historic changes, two veteran scholars said in an article published on the People’s Daily on Friday.

With decades of hard work, socialism with Chinese characteristics has crossed the threshold into a new era. This is a new historic juncture in China’s development. Xi declared in his report to the 19th National Congress of the Communist Party of China (CPC) on Wednesday.

This is a correct conclusion considering the reality of China’s development, commented Xie Chuntao, professor with the Party School of the CPC Central Committee.

After nearly 40 years of development since the launch of the reform and opening up policy, China has become a global leader in terms of economic and technological strength, defense capabilities, and comprehensive national strength, the professor pointed out.

China’s international standing has risen as never before, President Xi also stressed in his report on behalf of the 18th CPC Central Committee, elaborating that our Party, our country, our people, our army, and our nation have changed in ways without precedent.

Such changes, according to Xie, also served as a vital evidence to prove that the socialism with Chinese characteristics has really come to a new time.

Han Qingxiang, also a professor of the Party School of the CPC Central Committee, believed that it is the historic achievements and historic changes China has undergone which propel the socialism with Chinese characteristics into a new era.

“The judgement on the new era is also grounded on the evolution of the principal contradiction facing Chinese society,” Xie added.

As socialism with Chinese characteristics has entered a new era, the principal contradiction facing Chinese society has evolved. What we now face is the contradiction between unbalanced and inadequate development and the people’s ever-growing needs for a better life, President Xi highlighted in his report.

China has basically made it possible for people to live well-off lives, but the definition of a better life has also been expanded , Xie said, the public has not only material and cultural needs, but also increasing demands for democracy, rule of law, fairness and justice, security, and a better environment.

From the long-term, the unbalanced and inadequate development in China still constrains the country to meet the people’s increasing needs for a better life. This reality will direct the country to adopt a more comprehensive and balanced development approach, and better satisfy the public’s demand for a more prosperous life, Xie noted.

Han believed the new judgement made in the new historic juncture will endow the theory of socialism with Chinese characteristics with stronger vitality.