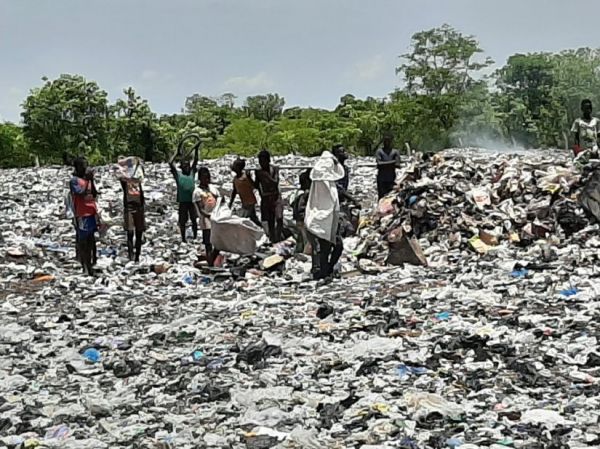 Some children from nearby communities at Sherigu in the Bolgatanga Municipality of the Upper East Region have resorted to loitering at a landfill site in the area in search of food and aluminum cans.

The waste products from within the Bolgatanga Township are dumped at the site by trucks from the Bolgatanga Municipal Assembly, Zoomlion Company Limited and the Food and Drugs Authority (FDA) in the Region.

The children, aged between five and 15 years walk on the charred waste without sandals, exposing themselves to sharp objects and broken bottles in their meticulous search for the empty cans and other valuables which they sell.

The Ghana News Agency (GNA) spotted the children when some officials of the FDA, the Environmental and Sanitation Agency, the Ghana Police and Ghana National Fire Service went to the site to dispose off regulated and expired products confiscated from provisions shops, pharmacies, herbal clinics, warehouses, cosmetic shops among others across all 15 Districts of the Region.

Not even the presence of the security personnel could deter the children numbering about 20 away, as they paid deaf ears to warnings and advice from officials, especially Mr Sebastian Mawuli Hotor, the Upper East Regional Director of the FDA, to stay off the site since the environment was not good for their health.

One of the children, about six years old and a pupil of the Apasenaba Primary School who was approaching the site to join his colleagues, told the GNA that he brought his parent’s cattle to graze around the landfill site, and decided to search for items at the site.

“They say a disease has come so no school,” he said, and joyfully ran towards his colleagues on the landfill site.

Another boy, about 15 years, said “I am here to look for containers to go and sell and buy my school sandals,” the boy told the GNA when it tried to educate him on the health risks he was exposed to, that he had over the years loitered on the site and even eaten some products he picked, and never felt sick.

The GNA gathered from members of the community that a child died in a reservoir for liquid waste located on the landfill site a few years ago.

Speaking to the GNA on why the area was not fenced even though concrete pillars were mounted around the site, Mr Joseph Atuura Amiyuure, the Bolgatanga Municipal Chief Executive (MCE) said a sister organisation of Zoomlion Ghana Limited, Waste landfill, was responsible for managing the site.

He said it was a contract between the Assembly and the company, “So as they work, Assembly pays but we have a few outstanding bills to pay them, that is the limitation now.”

Mr Amiyuure said per information available to him, “it appears very soon they will be paid their money. If we had the resources, we would have gone ahead to fence the area and await payment.”

The MCE said the area used to be fenced at the time the Assembly operated the site some years ago, but the fence broke down after the company took over management of the site, and reiterated that “We are also limited in terms of resources, in relation to payment of bills.”