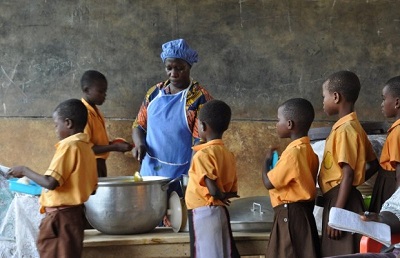 Twelve-year-old Jonas finally emerged from the bush, hurrying through cassava farms to meet his friends before school closes.

Clasping a bundle of firewood on his head, he gallops to meet the third lesson of the day, behind the primary four, classroom where he hides to pick a few English lessons.

The stunted looking boy is not enrolled in school because he needs to go to the farm with his parents to be sure of his meals in the day.

After weeding, gathering firewood and some foodstuff, he is released to go home around midday.

Many more children at Adaklu Henakope and Tevikpo spend a good time of the day on the farm, with some going to clear weeds before school and going back after school to pick foodstuff because their parents cannot give them money for meals while in school.

As a result, school enrolment in the communities and attendance is low, with the children engaged in economic activities –farming and cattle rearing.

Mr Emmanuel Tetteh, Headmaster of Henakope District Assembly (D.A.) Basic School in Adaklu, says hundreds of children in Henakope and Tevikpo are not in school because their parents cannot provide them lunch in school, with the school struggling with only 27 pupil population.

He says the few pupils, trek several kilometres to school and expressed the hope that with free lunch from the school feeding programme and a tricycle to convey them to school, enrollment will improve.

Mr Francis Agbemadi, Adaklu District Director of Education, says only nine basic schools out of 37 have school feeding programme, with those without it struggling with enrollment.

He said many pupils do not eat before going to school, with some developing health conditions, affecting their academics.

Experts say nutrition is important at every age and that children need proper nutrients to stay healthy and successful academically.

Feedingamerica.org says kids at risk of hunger may be less equipped to reach their full potential as they engage with the world around them.

It says studies show that children from homes that lack consistent access to food are more likely to experience developmental impairments in areas like language, motor skills, and behavior.

It also says children need nutrients to grow, develop and focus on learning instead of thinking about the food they need and that ultimately, they need to be able to concentrate in the classroom to succeed in school and be prepared to enter the workforce as adults.

Sources at the District Health Directorate say some researches are ongoing to establish cases of malnutrition among children and the health implications.

Mr Kwame Agbodza, Member of Parliament for Adaklu says the District is looking quite good in education infrastructure and needs government’s school feeding programme to keep pupils in good health to learn.

He assures that stakeholders will work on concerns including; the construction of a teachers’ bungalow and presented two motorbikes to the supervisory unit of the education directorate in the District and two laptops to the Henakope basic school when Pencils of Promise, an education focused non-governmental organization, handed over a three-unit classroom block with office, furniture, store, washrooms and a poly-tank for water reservation, to the School.

Mr Freeman Gobah, Country Director, Pencils of Promise urged parents to enroll their children and support them to remain in school.