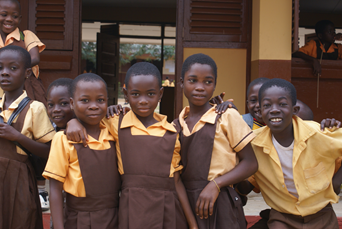 The President gave the directive on Sunday, August 30, 2020, during his 16th address to the nation about measures taken by the government to reduce the spread of COVID-19.

He said JHSs would operate with a class size of 30 pupils while SHS would have a class size of 25 students.
They are expected to be in school for next 10 weeks to study, and write their end of term examinations.

A visit by the Ghana News Agency (GNA) to some JHSs in the Bolgatanga Municipality around 0900hrs observed that some students have reported to school and were busy cleaning the compounds.

In an interview, Miss Anafo Joyce, a pupil of the Sacred Heart JHS in Bolgatanga, was happy that school had reopened, saying, more work needed to be done to cover up for the lost time.

Master Francis Mwintan, a pupil at St. John’s JHS said he was eager to be promoted to the next class, hence, the lockdown was an impediment to his aspirations.

Although ‘Veronica’ buckets with water and soap were mounted at vantage points for the pupils to wash their hands, the GNA observed that most of them were not wearing face masks.