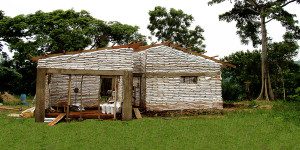 A building expert has advised the government of Ghana to include earthen architecture in the construction of buildings meant to replace schools under trees.

Mr Anthony Owusu, an architect and the Chief Executive Officer of Tonio Grup, said the government has to play a leading role to promote the use of local materials in the country. He said local building materials, especially those made from mud are more sustainable forms of affordable and ecological building.

According to the United Nations Educational, Scientific, and Cultural Organization (UNESCO) earthen architecture is an expression of the timeless ingenuity of human capacity to create a built environment with locally available resources. The most famous and a UNESCO Heritage site is located in Yemen dubbed the ?Manhattan of the desert? for its mud skyscrapers.

Mr Owusu believes Ghana should follow such examples and highlighted the government?s schools under trees project as an opportunity to introduce the technology.

?Government?s quest to removing schools under trees could have been one big opportunity to introduce the use of earthen architecture. Wherever there is a school under a tree, this can be replaced with an earthen building. We can then judge its performance over the course of time,? he said.

The building expert admitted that misconceptions about mud building being associated with poor quality had hampered its adoption. He said that research done by the Building and Road Research Institute (BRRI) had determined that mud was a highly efficient material for building in Ghana.

He stated that the establishment of a mud building project in conjunction with a conventional one would be the best way to determine its longevity.

?However if government continues to build with conventional materials it makes adoption of earthen materials difficult,? he said.

Mr Owusu indicated that Ghana?s Building Code makes provision for the adoption of earthen materials, adding that it is enough legal grounds for the country to implement. He also said that proponents of earthen architecture should start living in one to convince the public of its quality.

The Managing Director of Lamudi Ghana, Akua Nyame-Mensah said: ?Mud building could provide a unique solution for many sectors of Ghana?s economy. For the most part, it is highly energy efficient and could reduce the reliance on air conditioners in homes and offices. This would be prudent in light of the current electricity problems,? she said.

Conflicts cannot be considered as option, they are too expensive – Nana Asante

Expert Explains Which Procedures Cause The Most Risks In Lip Filler

The Bank Hospital describes its ambulance service as efficient, reliable

Expert calls for the need for continuous traffic education

BDR Officer calls for efficient registering of births and deaths