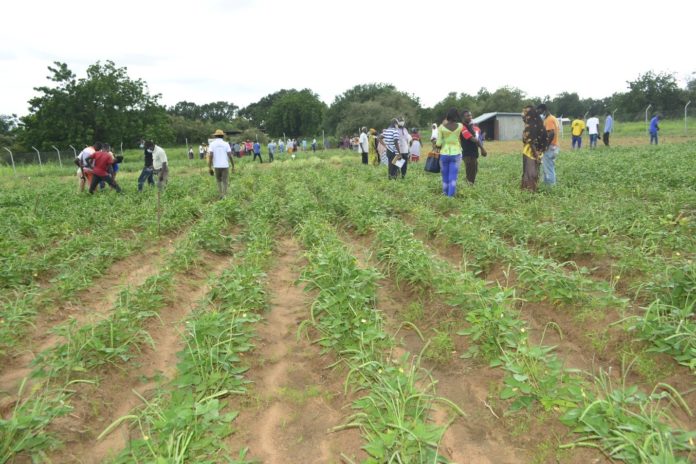 The Council for Scientific and Industrial Research-Savana Research Institute (CSIR-SARI) has developed a pest resistant Genetically Modified (GM) cowpea, beans, to save farmers from spraying the crop several times with pesticides.

The pest known as ‘maruca vitrata’ attacks the bean crop at the flowering and podding stage and can cause about 80 per cent crop loss depending on the severity of the attack.

Due to the lack of appropriate technology, farmers in the country manage the pest by spraying with insecticides, which can cause health problems.

This was made known by a team of scientists developing the Bt Cowpea, during a field day organised for 100 farmers and Agric Officers at a field trial site at the CSIR-SARI, Manga station, in the Upper East Region.
The farmers were drawn from Binduri District and Bawku Municipal.

Dr Jerry Nboyine, the Principal Investigator (PI) of the project, said CSIR-SARI in partnership with the African Agricultural Technology Foundation (AATF) had developed the Genetically Modified (GM) technology which involved introducing a trait/character from a fungus called Bacillus therigiensis (Bt) into the cowpea plant, the common bean.

This, he said would minimize the negative effects of excessive pesticide use on human health and the environment, as the farmers would not need to spray the crop several times with pesticides as it was being done currently.

The genetically modified crop according to the PI, was “one of the most extensively tested crops which is safe for human consumption because this technology reduces the chemical spray on the crop”.

Ms Gloria Adazebra, a cowpea breeder with CSIR-SARI said her outfit had conducted a research finding and found out that farmers suffered the impact of the pest on the four major cowpea varieties, Padi tuya, Apagbaala, Wan-kai and Kirkhouse Benga which are the most cultivated in the country.

“Once we realised that farmers cultivate these varieties and will love to have this resistant gene in them, that was why we picked these varieties up and introgressed it with our Bt gene”.

With the invasion of the fall armyworm, Ms Adazebra said there was a possibility that her outfit would collaborate with both local and international research institutions to introduce more Bt crops for farmers.

Dr Ibrahim Dzido Kwasi Atokple, a retired scientist of CSIR-SARI speaking on myths and misconceptions of Bt cowpea, said, just like any Genetically Modified crop, it was intensively analysed for human, animal and environment safety.

Dr Atokple said Ghana was among the signatory countries of the Cartagena Protocol that ensures the enforcement of biosafety laws and a biosafety agency for the release of crops including; GMO crops.

CSIR – SARI showcase its achievements in various fields of research