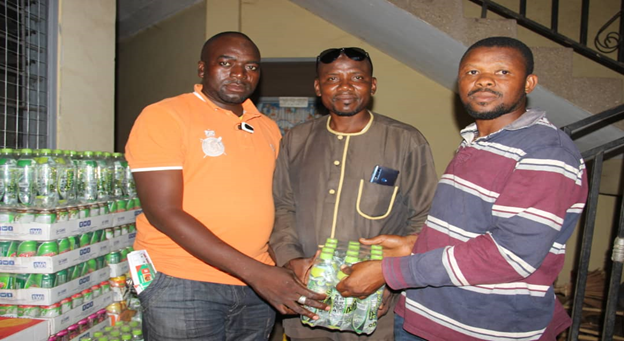 Mr. Yakubu Tony Aidoo, a Kumasi based scrap dealer, has donated assorted drinks, bottled water, and biscuits to 9,939 polling agents of the National Democratic Congress (NDC) in 12 constituencies in the Ashanti Region.

The items worth GHC 65,000.00 were to support the agents who would be representing the party at various polling stations in the selected constituencies.

Mr. Yakubu who doubles as the Communication Officer of Asawase Constituency said the donation was to ensure the agents do not lose concentration on Election Day due to hunger.

He said keeping an eagle eye on the processes at the polling stations required that agents must be well fed in order not to leave the station in search of food or water.

“Since elections are won at the polling station, it is important to put in place measures to ensure effective monitoring of the process and that is why we must ensure the needs of polling agents are catered for”, he observed.

He said he was convinced that the NDC was on course to win the December 7 election and that the donation was his contribution towards the impending victory.

He reminded all party agents across the nation of their critical role in the party’s quest to return to power and charged them to protect the ballot with all sincerity.

Mr. Mathew Ndjourkone, the Deputy Regional Secretary of NDC, commended him for what he described as a “huge contribution” towards operations of the party to recapture power.