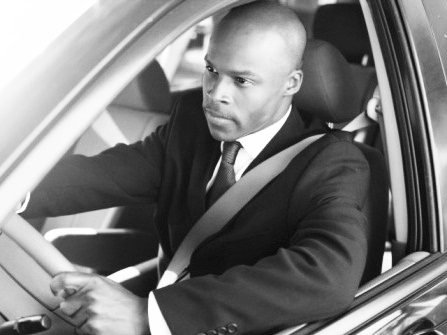 As alternative measures has proved futile, the hope in media has become the last resort The Greater Accra Regional Secretariat of the Ghana Private Road Transport Union (GPRTU) has called on the Media to as a matter of urgency use its powers to quickly call the Government for that matter the Driver and Vehicle Licensing Authority (DVLA) to order to amend its regulation or directives on the refusal of road worthiness of commercial vehicles meant for passenger services without seatbelt.

?We are certain that the press as the Fourth realm will carry this information in both the print and the electronic media to the door steps of the authorities through your power to inform and educate for the amendment of the regulation? says the Union.

According to the Mr. Robert Sarbah, Greater Accra Regional Chairman of the GPRTU who spoke on behalf of the Group told Journalist at a press briefing in Accra that the bone of contention has got to do with one Mr. Rudolph Beckley who is the Director of DVLA announcement somewhere in last July that with effect from September, 2014 this month, new commercial vehicles which do not have seatbelt will not be registered and also from March, 2015 the DVLA will not renew the road worthiness of commercial vehicles which do not have seatbelts fitted to each seats in line with Road Traffic Regulations 2012(L.I 2180) section 119(1) which was passed by Parliament which states ?A person shall not drive a motor vehicle unless the motor vehicle is fitted with seatbelts?. He further explained that parliament gave two years grace period for the commencement of this regulation, section 120(4) however, lamented that the views of the Ghana Private Road Transport Union (GPRTU) as affected persons were not sought describing the situation as unfortunate saying ?if we have been relegated to the background, we should not also be denied much education on this new regulation just like what was done when Ghana changed from left to right hand drive on August 4, 1974? he bemoaned.

?We suspect a hidden agenda by the authorities in the whole scenario calculated with an intent to write off most of our vehicles by denying the drivers road worthiness since the authorities are aware that seatbelts cannot be fitted in most of our vehicles thereby giving undue advantage to our competitors when the Bus Rapid Transit(BRT) becomes operational and eventually push our drivers into the unemployment bracket and its ripple effect will affect the peace of the country as some may indulge in anti-social activities? the group stated.

He allegedly claimed that Rudolph Beckley?s assertion that the implementation of the Legal Instrument (LI) on the use of seatbelts would achieve a 50 percent reduction in deaths and serious injuries associated with vehicle accidents by 2020 was not backed by any scientific proof describing it as a pure fallacy intended to throw dust into the eyes of the General Public and also to win sympathy so as to incite them against the GPRTU and other transport operators. ?Seatbelts are not the only safeguards against accidents and the authorities should broaden their focus to cover other preventive measures? he emphasized.

To back their case with good points as to why DVLA is making a case out of seatbelts as the only contributing factor to the reduction if 50 percent reduction in deaths and serious injuries on the roads they claimed. The group is therefore demanding answers from Government to the following questions 1. What of the bad roads? 2. Non availability of Road markings on many roads and streets? 3. Absence of street lights in many of Ghanaian streets which makes visibility very difficult? 4. Lack of good spare parts for use by drivers? and finally what about unclear road signs?

In addition to that the group also alleged that they have listened to a media report which stated an amount ranging between GH cedis 2,000 and 3,000. Cedis will be charged for fitting seatbelts in each vehicle which is highly prohibitive and could be passed on to the poor passenger.

They?ve also argued about the fact that in developed world where most policies and seatbelts are manufactured some concessions are made for their intra-city (trotro) bus services asking why not in Ghana. ?Many can attest that on visits to London, Liverpool, and Manchester, all in Britain, passengers who board intra-city buses are not required to put on seatbelts and there are some others who even stand in those buses and in America which is called Metro. It is the same thing including some ford buses that ply New York to Washington and also in Sao Paolo, Rio de Jeneiro in all in Brazil? they said.

Mr. Sarbah has also announced that DVLA in consultation with National Association of Garages had just selected more than 300 Mechanics from 65 garages who are to undergo three week training organized by a seatbelt manufacturer in October and the first batch of the seatbelts was expected to arrive in the country in December which he described as an expression of uncertainty like putting the cart before the horse.

He noted GPRTU is not totally against fitting of seatbelts but rather established it will be appropriate for the intercity or a long distance vehicle.

He however, used the opportunity to also caution drivers against speeding, wrongful overtaking, driving under the influence of alcohol and other unwanted drugs to help save lives and property.