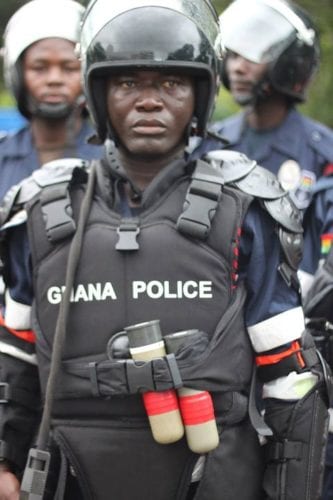 Chief Superintendent of Police, Mrs Mercy Wilson-Brown, has said the security agencies would descend heavily on people who may want to foment trouble on polls day.

She said the Police would be ruthless against troublemakers and urged such people to review their game plans or be dealt with according to the law.

She said anyone who flouted the law before, during and after the general elections would have themselves to blame, saying “corporate Ghana belongs to peace lovers and not trouble makers.”

She said the mandate of ensuring peace was given to the security agencies and citizens should have the trust that they would deliver their duty without fear or favour.

C/Supt. Wilson-Brown added that the Police Service was working with other sister security agencies, including the Immigration, Customs, Military, Fire and Prisons Services to maintain the peace before, during and after elections.

The meeting was geared towards public sensitization and education on civic responsibilities, security and also to create the need for all to work towards achieving peace before, during and after elections.

Mr Eric Dzakpasu, the Deputy Regional Director of Electoral Commission (EC), said voting would take place in 2,260 polling stations out of the national figure of over 38,000 polling stations across the country, which is an increase of the 2016 figure of 2,011.

He said the EC had pledged to deliver professionally with integrity, fairness and transparency.

Mr Oral Robert, Deputy Volta Regional Director of National Commission for Civic Education(NCCE), said citizens needed to tolerate and encourage each other to support the message of peace to have a peaceful and successful election.

Mr Johnson Avuletey, Deputy Minister of the Volta Region, said there was no development without peace and freedom.

He urged the youth not to allow themselves to be used by any political party but they should uphold and defend the good name of Ghana.

He expressed his gratitude to the security services for their swift response against the Western Togoland criminals and for maintaining the peace and order in the Region.

Togbega Dzekley Patamia VII, Vice-President of the Volta Regional House of Chiefs, said the peace of the region and country was the topmost concern.