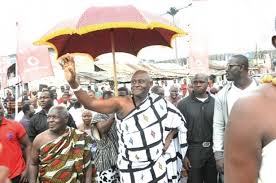 The president and members of the Osu traditional council and the kingmakers Osu stool have debunked allegations raised by self-acclaimed David Lartey Ashong aka Nii nortey Owuo as legitimate chief of Osu is false, saying his posture is an insult to the Osu paramountcy. In a news conference held to set the record straight by the legitimate kingmakers and members of Osu traditional council, the Osu Dzaasenye Naa Teinor Osa Ayilo I, hinted that the two ruling houses and the kingmakers came together to install Nii Okwei Kinka Dowuona VI as Osu Mantse and with support from the Traditional Council the legitimate chief known in private life Micheal Okwei Dowuona Owoo has gone through all the Traditional process namely installation,induction into?klotey shrine?inside christianborg castle and finally the swearing of Oath of allegiance to the people of the Osu community in 2010.
After that he has also gone through all the statutory process and his name registered in the National house of chiefs for which he represents both Osu traditional council and the regional house of chiefs in the National House of Chiefs respectively.
Naa Teinor lamented that Nii Okwei kinka Dowuona VI Legitimate Osu Mantse and President of the council was installed in may,2007 by legitimate kingmakers of Osu stool and remain same as of now.
Immediately he was installed, one David Lartey Ashong AKA self-acclaimed Osu mantse File contempt charges against the kingmakers and Nii Okwei Kinka Dowuona VI, at the High court.claiming that the supreme court has decleared him as the Osu mantse and the kingmakers flouted the orders of the court.
The supreme court dismissed the application on grounds that it did not have jurisdiction over chieftaincy issues also the ruling in may 2006 was a landlord and tenant matter over rent and the produced an extract from register of chiefs showing his name as the osu mantse.The writ was dismissed and a cost of GHc5000.00 was awarded against him.
He has not settle the amount till date.According to her,ever since the dismissal of the writ, self-claimant NII Nortey Owuo and his cohorts have been stopped filling writs as to his legitimacy and fraud.
Some personalities who grace the are namely Nii Saban Atse VII(Osu Stool Dzaase),Numo Gbelenfo III(Gua wulomo),Numo Narku Agbeti II(OSU KLOTEY WULOMO)Solomon Nortey Owuo(Head of Owuo We ruling)William Nortey Dowuona(Head of Dowuona We Ruling)etc.