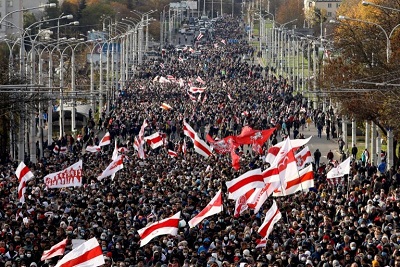 Ahead of new mass protests expected in Belarus on Sunday, the police and military have deployed with heavy equipment.

The independent news portal tut.by published photos showing off-road vehicles with machine guns on the roof in the capital, Minsk. There were also many prisoner transporters and a large number of security forces on display.

In Minsk, security forces cordoned off several central squares, and several metro stations were closed so people couldn’t get to the protests so easily. In addition, the mobile internet was not working at times. Authorities want to prevent demonstrators from meeting via Telegram and stop videos of arrests from being quickly distributed.

Tens of thousands of people are expected to turn out in the afternoon for renewed protests against long-time leader Alexander Lukashenko.

The opposition have called it the “March against terror” in view of the increasing violence against protesters and the opposition by police and security forces. “He has declared war on his own people,” the organizers said in an appeal to the public.

They said Lukashenko is using violence to hold onto his power.

Lukashenko has signalled he may crack down further on demonstrators in recent days. “It’s enough now. We will not back down,” he said on Friday as he inaugurated his new interior minister, Ivan Kubrakov, previously the chief of Minsk’s police force.

“If someone touches a member of the military, they must leave at least without their hands,” he said.
Lukashenko, 66, has led Belarus for more than a quarter of a century, tolerating little dissent.

There have been regular protests in the former Soviet republic since the start of August, after a presidential election that handed Lukashenko 80.1 per cent of the vote. The opposition considers its leader, Svetlana Tikhanovskaya, to be the actual winner of the vote.

Tikhanovskaya, who has fled Belarus and is currently in exile in neighbouring Lithuania, is supported by the European Union. Lukashenko, on the other hand, receives backing from Russia.

The 38-year-old called for participation in the march, which she described as a peaceful action to “protest the terror of the state.”

The protests are typically biggest on Sundays. Last Sunday’s protest in Minsk is estimated to have drawn more than 100,000 people. Security forces used flash, smoke and noise grenades against the crowd a week ago.