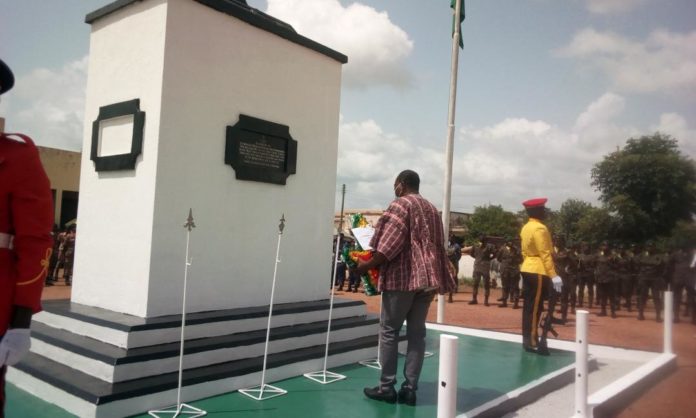 Security services and Ex-Servicemen in the Bono Region have marked the 75th Remembrance Day Anniversary in Sunyani with wreath laying.

The wreath laying ceremony was held at the forecourt of the Veterans Association of Ghana (VAG) Hall in Sunyani.

November 11 is set aside each year in remembrance of security personnel who died during the First and Second World Wars as well as all officers who died during wars and conflicts.

A contingent of 300 security personnel from the Ghana Armed Forces, Ghana Police Service, the National Fire, Immigration, and Prison services, Customs Division of the Ghana Revenue Authority, and VAG were under the command of Lieutenant John Yaw Kwarteng of the Three Garrison Battalion (3BN).

The Ghana National Fire Service sounded a siren to pave the way for Ex Warrant Officer (WO1) Johnson Konadu, the Bono, Bono East and Ahafo Regional Chairman of the VAG to read the Binyon verses in memory of the fallen heroes.

Mr Siaka Stevens, the Deputy Bono Regional Minister, laid a wreath on behalf of the Government, and Deputy Commissioner of Police (DCOP) Godfred Boateng, read on behalf of the security services.