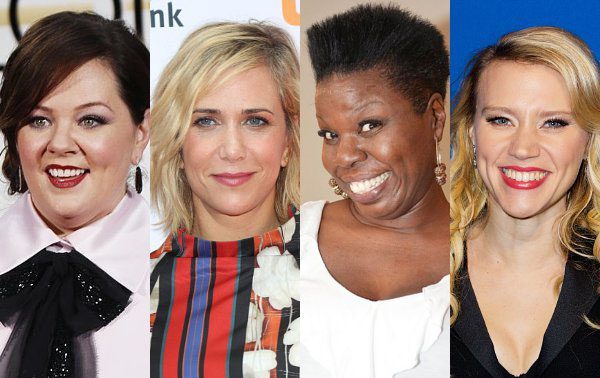 The untitled Ghostbusters reboot is close to signing the cast members. According to a Tuesday, January 27 report from THR, Melissa McCarthy has boarded the movie, while Kristen Wiig as well as ?Saturday Night Live? stars Leslie Jones and Kate McKinnon are in negotiations with Sony regarding the roles.

Director Paul Feig seemingly confirmed the casting, tweeting photos of the four actresses. A representative for McCarthy, however, tells Us Weekly that the ?Spy? star is still in talks. Written and directed by Feig, the movie is set for release next year. ?In other news, #Ghostbusters will be hitting theaters July 22, 2016. Save the date!? Feig said in another post. It is set to start production in New York City this summer.

Shortly after the potential cast members were revealed, HitFix shared some alleged details regarding the plot. According to the site, the Ghostbusters team will consist of characters named Erin Gabler, an academic on the tenure track at Columbia, her former colleague Abby Bergman, and Jillian who is Abby?s hunting partner. There is also Patty, an MTA subway ticket employee who comes across the main ghost in the film. They speculate that Wiig is playing Erin, Jones will portray Abby, McKinnon is Jillian and McCarthy is Patty.

Apart from the main cast, there will be other characters such as a ?creepy mechanical genius? who will be the bad guy in the movie. Peter Dinklage reportedly is wanted for the role. Bill Murray allegedly is eyed to play Martin Heiss, a supernatural debunker who tries to prove the videos posted by the Ghostbusters online are fake.