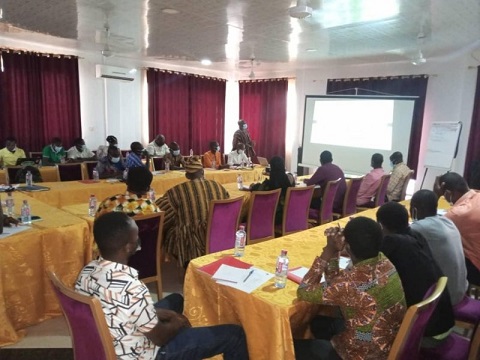 The Market-Oriented Agriculture Programme in North Western Ghana (MOAP-NW), has trained a total of 85 seed producers and seed inspectors on quality seed production and regulations.

The week-long training, which was in partnership with the Plant Protection and Regulatory Services Directorate (PPRSD) of the Ministry of Food and Agriculture (MoFA) is to enable the production of the right quality of improved certified seed needed for use by farmers.

Mr Bashiru Fuseini, the Deputy Head of MOAP-NW in a speech delivered on his behalf by Dr Zakaria Issahaku, the Technical Advisor, said the training was focused on quality seed production procedures and quality assurance and regulations because of the important role quality seed played in the development of agriculture in the country.

This, he said, was a key factor in MOAP North-West’s drive to improve quality production in the agricultural sector.

“Together with our partners in the seed sector, there has been a tremendous increase in the production and availability of foundation seeds and certified seeds”, Mr Fuseini said.

The Deputy Head of MOAP-NW further added that if the seed was improved in quality and quantity, it would reduce importation, thereby, boosting the local economy.

“There is the opportunity for job creation, especially for women and youth, in the seed sector”, he pointed out.
MOAP NW is a GIZ-implemented project funded by the European Union (EU) and the German Federal Ministry of Economic Cooperation and Development (BMZ).

The project represents one of the main pillars of the EU Ghana Agriculture Programme (EUGAP) and supports the growth of agribusinesses with capacity building and technical assistance for the value chain actors, working with public and private service providers for robust and successful agribusinesses.

Mr Emmanuel Sasu Yeboah, the Upper West Regional Director of the Food and Agriculture, noted that the training was very essential, as it had supported the government’s agenda of Planting for Food and Jobs (PFJ)and had a prime focus in the seed sector.

“Locally sourced quality seed are in high demand following the subsidies provided through the PFJ. Farmers in the Upper West Region are adopting the improved seeds, which create a big demand from our seed producers”, he said.

He said for decades now, there had been an increase in volumes in the production and certification of maize, rice and soybean, which was an indication that the seed business was growing.

Alhaji Abdulai Seidu Antiku, the Vice President of the National Seed Traders Association of Ghana (NASTAG), expressed appreciation on behalf of the seed producers for the training by MOAP-NW.

Mr Antikuu, a seed producer himself, assured farmers in Ghana’s North-West of quality certified seeds from the stock of seed producers in the region.

Munashetu Abudu, a Participant and a Seed Producer from Daffiama-Bussie-Issa District expressed joy for the knowledge acquired and indicated that they would apply the knowledge and skills gained to increase the quality of seed production to satisfy the needs of farmers.