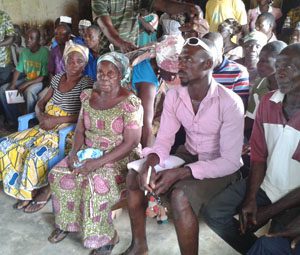 Sefwi residents during the meeting

Over 200 angry residents of Asuboi, near Suhum, have threatened to block the Accra-Kumasi Highway if they are not properly compensated for the damage caused to their buildings.

The residents announced the plan to block the entire stretch of road at a meeting held in the community on Thursday.

They complained bitterly about how their water bodies had been polluted as a result of the frequent blasting of rocks from the construction company working on the road.

The angry residents added that ?our buildings have developed deep cracks and our roofing sheets have rusted all because of the construction.?

They also contended that efforts made five years ago to get compensation for the damage to their property proved futile.

Therefore, a week?s ultimatum has been issued to the Chinese construction firm, China Water and Engineering (CWE) and the Ghana Highway Authority (GHA) to respond appropriately.

They added that if no positive response is heard from them, they would embark on a demonstration.

Briefing DAILY GUIDE, the group?s spokesperson, Samuel Oheneba Siaw, disclosed that ?most of the victims have abandoned their affected buildings and are now lodging with their families, while others are still occupying their deep cracked houses to the detriment of their lives.

He added that ?residents, including market women, have to flee the community whenever the rock blastings are being done.?

Mr Siaw further admitted that flying stones have on several occasions caused damage to many building in the Asuboi community.

He said although several petitions had forward to the appropriate quarters for compensation to be paid for damaged properties, no positive response has been received yet.

Florence Agyare, an 80-year-old woman, who spoke to DAILY GUIDE, appealed to the government to intervene in the matter to save them.

However, attempts to speak to the Chinese construction company proved futile.