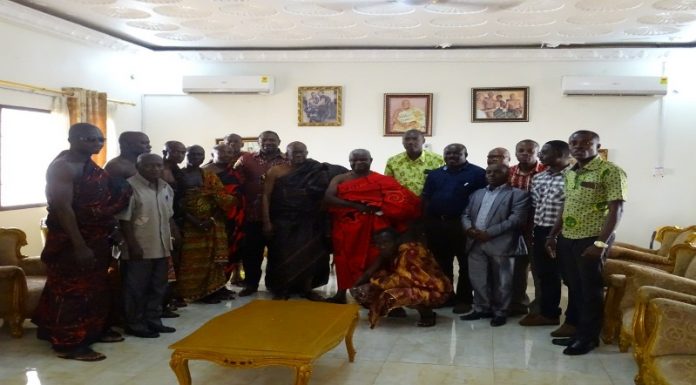 This follows the development of a farm agreement by the Sefwi Traditional Council for tenant farmers occupying stool lands in the area.

He explained that the Traditional Authority had no intention of making cocoa farming or replanting difficult for farmers in the area.

He extolled the important role tenant farmers played in the cocoa economy of the traditional area.

The Omanhene gave the assurance that the Traditional Council would continue to provide the needed support to farmers as they continued to give the due recognition to the stool.

SNV’s initiative seeks to deepen farmer understanding of the draft farm agreement developed by the Sefwi Traditional Council, which aimed at renewing the tenancy of farmers and facilitating the documentation of occupants of the stool lands.

SNV also facilitated meetings that brought together tenant farmers, the traditional authority, private sector organisations, including Olam, and the Produce Buying Company (PBC), and other stakeholders.

The meetings helped to establish common grounds between the Sefwi Traditional Council and tenant farmers in the Bia West District, including agreement on flexible terms to enable tenant farmers to initiate replanting of their overaged farms.

This constitutes a shift from the well-known traditional land acquisition for sharecropping systems, including efforts to delink cropping from landownership, irrespective of how long a tenant farmer has occupied a piece of land.

It is a move away from the initial customary grants – a one-off token, popularly known as drink money, meant to show loyalty or allegiance to a stool for land acquired for farming or development purposes.

It also ensures forest monitoring in collaboration with three private sectors organisations in the selected forest-cocoa interface areas of the high forest zone of Ghana.
The project is being implemented with funding support from the German Federal Ministry for Environment, Nature Conservation and Nuclear Safety (BMUB) over a period of three years.