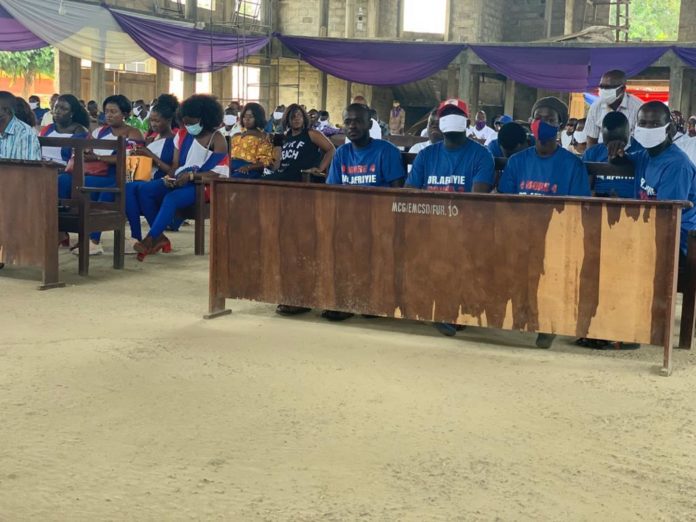 The Sefwi-Waiwso constituency of the New Patriotic Party (NPP) has inaugurated a 28 -member campaign team to coordinate the party’s campaign activities ahead of the December Presidential and Parliamentary elections.

The campaign team is co-chaired by Dr Kwaku Afriyie, Member of Parliament and Mr Micheal Kwarteng, constituency chairman with all constituency executives being members.

Mr Assuah, Regional chairman tasked them to work hard to ensure the party wins both Presidential and Parliamentary in the December polls.

He said that the NPP won the Waiwso Parliamentary seat for the first time in 2016 with over 5000 votes, but lost the Presidential with a margin of about 250 votes and tasked them to work extra hard for the party to win both Presidential and Parliamentary.

Dr Kwaku Afriyie for his part, said he had achieved a lot for the constituency and asked members to improve upon the strategy they used in 2016 to maintain the seat.

Mr Owusu- Agyapong, MCE said each party member was a campaign manager at their electoral areas and asked them to intensify their house to house campaigns to bring more members.

Mr Kwarterng, on behalf of the other members pledged to work hard and bring everyone on board especially NDC members to vote for the NPP as was done in 2016.

He also called on the rank and file of the party to forgive each other and unit since that was the only way the party could maintain the Parliamentary seat and increase the Presidential votes.

Mrs Golly Antwi Bosiako, Regional women Organizer, who was disqualified from contesting the party’s primaries declared her unflinching support for Dr Kwaku Afriyie and asked all aggrieved members to join the campaign since the party was bigger than any individual.