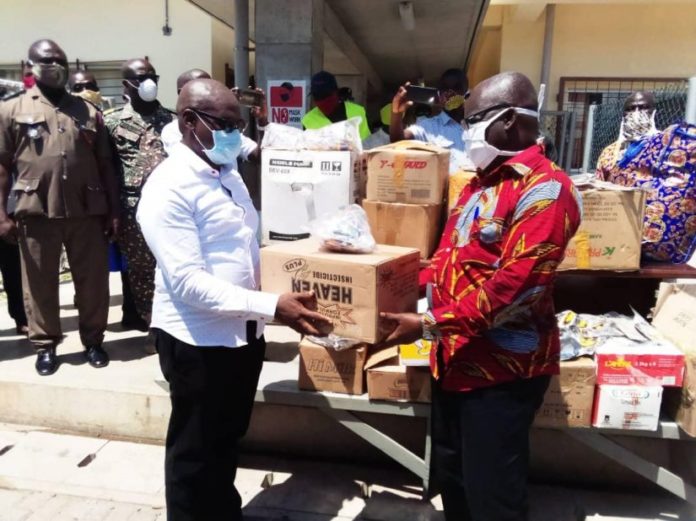 The Sekondi-Takoradi Landing Beach Committee has presented 13, 500 nose masks to the Mayor of the Sekondi-Takoradi Metropolitan Assembly (STMA) to be distributed to fisherfolks and individuals who patronize the Albert Bosomtwi Sam Fishing Harbour.

The beneficiaries should also include those who patronize other shores in the Metropolis.

Mr Anthony K.K. Sam, the MCE for the Sekondi-Takoradi Metropolis who received the nose masks on behalf of the beneficiaries, indicated that nose masks have become a critical protective tool in controlling the spread of the COVID-19 pandemic and therefore, mandatory apparel in most communities in the country.

He urged the fisher folks to embrace the wearing of the nose mask to avoid the spread of the COVID-19 pandemic.

Mr Sam stated that STMA and Effia-Kwesiminstim Municipal Assembly COVID-19 Security Committees were collaborating to find measures to effectively enforce the wearing of the nose masks and social distancing.

Mr Samuel Addotey, Chairman of the Committee explained that they decided to help the fisher folks and individuals who used the Albert Bosomtwi Sam Fishing Harbour with the resources since the harbour saw hundreds of clients daily.

The distribution of the nose masks would benefit the various Landing Beaches in Ngyiresia, Ekrufo Mpano ‘A & B’, Kokobo, Sekondi Central, Sekondi Lower, Sekondi Upper and Sekondi Main.

Mr Addotey emphasized that authorities at the Albert Bosomtwi Sam Fishing Harbour would enforce the ‘No Nose Mask No Entry’ policy at the various checkpoints at the Fishing arena.