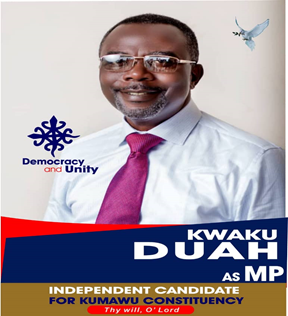 The Sekyere-Kumawu Youth for Development Association, has appealed to the President, Nana Addo Dankwa Akufo-Addo, to appoint Mr Kwaku Duah for the position of District Chief Executive (DCE for Sekyere-Kumawu.

According to the youth, it was time the District got a leader who was resourceful with great heart, vision, passion and understood the problems and challenges of the District, to help bring the needed development the people were yearning for.

These were contained in petition signed by Mr F.K Yeboah, President of the Sekyere-Kumawu Youth for Development Association, to the Office of the President, a copy of which, was made available to the Ghana News Agency in Kumasi.

The youth said Sekyere-Kumawu had been denied of the needed development largely because of poor leadership, which in effect had brought little change in the living conditions of the people, especially the youth.

It was in line with this that the youth registered their displeasure with the NPP parliamentary candidate, Mr Philip Basoah and his hand-picked delegates who manipulated the parliamentary primaries in his (Basoah) favour.

The statement said the youth contacted Mr Kwaku Duah to contest Mr Basoah as an independent candidate to usher in the needed change for unity and development in the area.

The youth said Mr Kwaku Duah was a resourceful, problem solver, tactful with good character and had cordial relationship with all the people, including the traditional and religious leaders as well as youth groups in the various communities,

According to them, Mr Kwaku Duah had proven to be persuasive, affable and intelligent man during the parliamentary campaigns to the admiration of all and they were of the firm believe that he was the right person to lead the development process in the District to uplift the people from their present conditions.