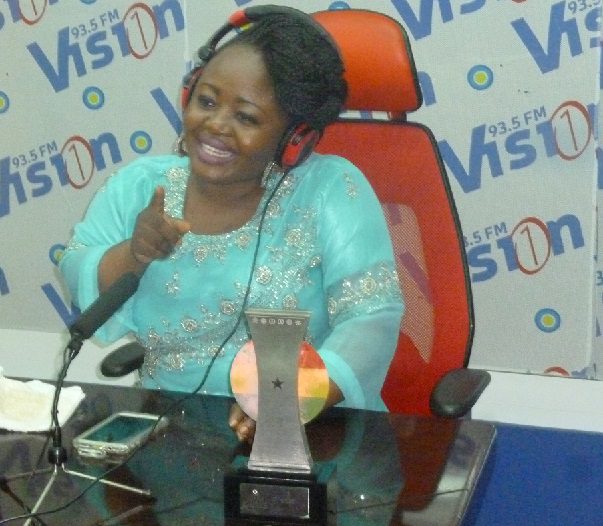 The winner for 2015 Best Gospel Song Of The Year made this comment on Vision1 93.5 Fm on The Drive Time Show, Ofie Nkwanta with Kay.

According to Selina, more of our event organizers book gospel artistes to perform but sometimes, refuses to discuss payment with them just because they do gospel.

She furthermore referred to the Bible and said, it is written that, man shall eat from preaching the word of God and that is why gospel musicians, who have taken music making as their only source of income need to eat from it as well.

When asked by Kay on her sad beginnings, Selina said her music career started from Kumasi, Amokrom, where she used to be backing songs for musicians like Oware Jnr, Mama Esther and more.

Selina at a point in time lost hope and nearly gave up because, according to her, these musicians she was always backing for are the ones the world is recognizing while she always acts behind the scene.

She then met a man and his wife, Stephen and Philipa, who gave her the platform and started investing in her songs in the year 2009.

Talking about unity in the gospel music industry, Selina went blunt and straight to the presenter and said – There is no form of unity in the gospel industry. It is never done anywhere, even in our homes, the mother or father has a particular child they love more than the others – but for me, i think it is the word of God that brings togetherness. Apart from this powerful word, there are a lot of separations everywhere including the music industry.

Selina moreover said she isnt a musician who will sing for an award or prize. According to her, she sings for the souls who need her kind of message and that is why she sees herself to be doing the work of God – so if there is any kind of award or package to be given to her, then it has to be a Godly one from above.

But, if I should get an award on earth, then it tells how the souls are appreciating what i am telling them. Selina added.

Before Selina left the studios, she congratulated No Tribe for winning the Gospel Artiste Of The Year and confessed the group has worked very hard, hence, they deserved the award.

She finally tackled the Kantanka Car that was given to No Tribe and according to her, she sees nothing wrong with it.

Explaining herself, she said, if someone should win a car from his/her song, then there is no point of debating about what the organizers have given him/her because to me, that person deserves it.

Selina Boateng won the 2015 Gospel Song Of The Year with her Alpha And Omega album.

The Ofie Nkwanta drive time with Kay on Vision1 93.5 Fm is live on Monday too Friday – 3pm to 6pm.